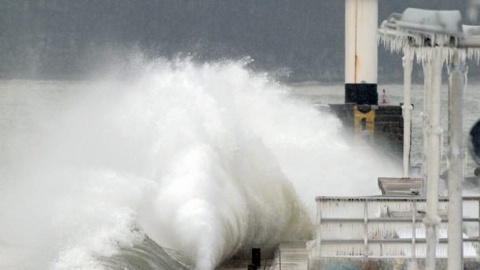 The Deputy Regional Governor of Varna, Slavcho Slavov's probe in the nearby area has revealed huge losses.

Eroded beach bars and restaurants; huge stones thrown from the sea on the sand beach and on the promenade, dead birds - this is the reported situation in Varna. Almost a third of the sand from the beach had been dragged into the sea, which is calmer Thursday.

The central "bath house" on the beach is also eroded, as is the asphalt on the entire road along the water. The Varna Region road that follows the coastal line is totally destroyed and impassable in one section. Mud slides are expected in the region when the snow starts to melt.

There is wide-spread similar damage on the entire coast south of Varna to the Turkish border; damage on the northern Black Sea coast is less because the winds there were not that strong.

In addition, there are two reported casualties with two men drowning – one in Varna and one in the other Black Sea city of Burgas.

The incident in Burgas has happened on the pier – a young man, 20-25, and a girl were noticed there by a police patrol around 6 pm Wednesday. The teen girl, 18, had been taking pictures of the stormy sea while the man had been walking around. Police warned them to leave and when they looked again a minute later – the man had been gone. It is presumed that he had been dragged in the waters. The body had not been located.

In Varna, the body of a middle-aged man had been found by a passerby Thursday morning on the so-called "Fisherman Beach." The identity and the cause of death, deemed to be drowning, are yet to be officially established.