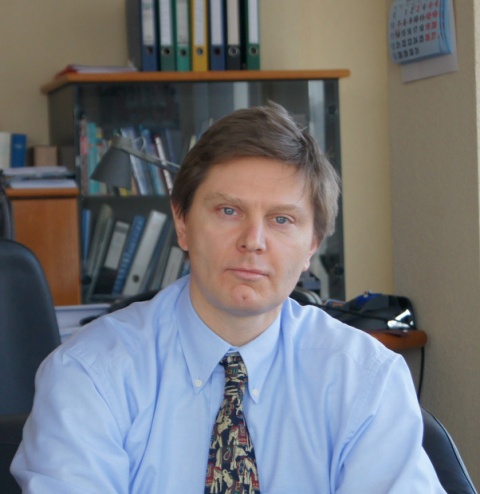 Solvay Sodi is the largest Soda Ash plant in Bulgaria and Europe for synthetic soda ash production, with a nominal capacity of 1,5 Mt/y.

Solvay Sodi is one of the biggest industries in Bulgaria, representing around 1% of total Bulgarian export.

Eric Vander Vorst was born on October 7, 1962 in Uccle, Belgium. He holds a degree in Business Management (Solvay Business School in Brussels) and mechanical and electrical engineering (University of Brussels). Vander Vorst had followed postgraduate courses at the Business Schools IMD of Lausanne and INSEAD (France, Singapore).

In 1987, he joined Solvay, held various positions for the company in Belgium and was in charge of the Vinythai PLC, a joint venture of Solvay in Thailand. For 8 years Vander Vorst was Solvay's corporate Purchasing Manager in charge of a portfolio worth EUR 1200 M a year.

Mr. Vander Vorst, what were the biggest challenges you faced when you took over management of the factory in Bulgaria?

As usual when entering in a new job and a new country, there is a kind of cultural shock. You need to be acquainted quickly with the do's and do not's, find new habits of life and become at the same time accepted by the staff. The 3 first months are also critical in order to build your credibility, demonstrating your competences and added value and develop with your team the vision and short term priorities.

I would say that living in Varna's area is not difficult, the language is not easy but fortunately Bulgarians are good in English and sometimes French. The difficulty at beginning was to understand what the environmental priorities were: there were accesses and depots problems, CO2 quotas issues, taxation audits and changes...

Bulgaria was at that time a 2 years old member of EU, the adaptation of EU directives in these various fields and the collaboration with various authorities, government and courts was challenging. Despite the fact that there is an overall willingness from the government and local authorities to support business and investors, such as Solvay, these necessary collaborations are still not as simple and straightforward as I was expecting.

How do you view the business environment in Bulgaria? Is the government more of an obstacle or more of a help?

Bulgaria has a lot of advantages, benefiting the business, such as a favourable geographic location, especially in our case - the export hub through the port of Varna West for the Balkans, Mediterranean regions, Middle East and Asia. The country is also rich in raw materials. Labour costs are low but productivity is somewhat low too and contractors are sometimes under equipped.

Another significant asset is, of course, the lower direct taxation. However, as the new president, Mr Plevneliev recently stated, it is not enough to have lower taxation in order to attract investments. It is also required to guarantee predictable and stable investment environment, to have a clear long-term vision for economic development and lower the administrative burdens.

I think this government is cautiously managing its budgets in this financial crisis and is doing appreciable efforts so that the country has avoided financial disasters as some of its neighbours. We have however a major disagreement with the Ministry of Finance, deciding to raise excise duties on fuels used for cogeneration.

This is a precedent in Europe, where on the contrary governments are developing cogeneration privileges. To my view, it is also an ecological nonsense since gas is non competitive in Bulgaria. On this aspect, which is burdening our costs by several %, we would like to reach an understanding and reasonable solution from the government.

In some other fields as e.g. the Environmental ministry, I believe while being strict, the authorities are also pragmatic and supporting us when searching for the best technical solution.

It is indeed one promising and still developing sector of the economy which is creating a large number of jobs. For example, Solvay Sodi & subsidiaries directly employ over 670 people and indirectly (as subcontractors) – around 1300.

We are currently also modernizing the fluorite installations and technologies in Chtiprovtsi, that we acquired last year. I believe that more stable fiscal rules would make the Solvay group probably more willing to invest in Bulgaria.

For the rest I agree with M. Traikov - as there is an unavoidable consolidation of the chemical industry in Europe and neighbours to Bulgaria, only the best will prevail and for sure there is a card to play for Bulgaria.

How do you assess the effect of your investments on the local economy? What is the significance of the company for the economic development of the region?

Since its privatisation in 1997, Solvay Sodi is well rooted in Varna region. As I said, we generate significant employment, even more during times of renovation or construction of new installations. Furthermore, Solvay Sodi is contributing significantly to the country's trade balance since we are exporting 85 % of our production.

With that I would say that we are the biggest investor in Varna and probably Northeastern Bulgaria region. We are also the biggest company in turnover and this was recognized last year by the prize for maximum revenues, awarded by the Bulgarian Chamber of Trade and Industry

In what sectors is Solvay Sodi's products used the most? What is the primary application of your products?

Solvay Sodi is focused on serving customers in the glass industry (flat glasses for windows and cars, pack glass) representing about 50 % of the sales, detergents markets- about 15%, and the rest is split between chemicals, silicates, fiberglass and metallurgy industries.

What has been the effect of the economic crisis on the company? Do you have data on your economic performance for 2011 already?

Economic crisis has, of course, also hit the chemical industry, however we are trying to minimize its effect via maximizing the production and relentlessly optimizing our costs and energy consumption

What investments has "Solvay Sodi" made in Bulgaria to date? What is your investment program for the short and medium run? For example, do you plan investments in renewable energy or green technologies?

As I said, Solvay Sodi is one of the biggest investors in Bulgaria. We are investing 25 to 50 MBGN per year in plant renovation, environment and energy savings projects and overall, for the period 1997 we have invested 868 MBGN.

For the consequent period - 2012-2017- there is a significant investments plan considered for bringing installations in line with EU legislation and the final phase of the renovation of the power plant, Deven TPP.

What and where are your main markets and has the crisis changed these markets? What are your forecasts for the financial year 2012?

As I previously said, Solvay Sodi is a large exporter, representing around 1 % of total Bulgarian export. We export 85 % of our production, mainly from the port of Varna West. Main destinations are the Balkans, Russia, Middle East, the Mediterranean Basin as well as South America, Africa, and Asia.

In 2012, with the recent acquisition of the Rhodia Group, Solvay employs about 30.000 people worldwide and becomes the sixth world chemical group, one of the priorities of which is the geographical expansion. Having this in mind, Solvay Sodi will definitely have a more global presence with higher volumes and sales.

How does the increase in gas price affect the production and exports of the company?

Natural gas is very expensive in Bulgaria compared to other fossil fuels and we stopped using it. Indirectly, any increase in the price of gas affects some of the raw materials. I would say that the higher price of gas will aggravate our obligations to several hundred thousands of leva.

Even if we understand the commitments, resulting from EU legislation, we could not support such an increase having in mind that the gas price extremely higher than in the US and unbearable for the majority of the power sector.

We firmly endorse a transparent method of price calculation and a predictable price regulation, guaranteeing the competitive position of industrial players

Tell us about the "Solar Impulse" project and the overall innovation strategy of "Solvay" group?

We are investing considerable resources in innovation. To give you one example: recently we have invested more than 150 MBGN in the most innovative method to produce energy - the combined heat and power generation which lead to the creation of the largest cogeneration station in the Balkans.

Cogeneration is highly efficient and environmentally friendly means of generating heat and electric power at the same time from the same energy source.

Solvay Sodi's cogeneration installation is constructed with a state-of-the-art technology, unique not only in Bulgaria but also in Europe. It is in line with the latest EU environmental standards for CO2 and other emissions (sulphuric oxides, nitric oxides, dust).

Combined-heat-and-power installations like ours can achieve overall energy efficiency levels of around 90% and can reduce carbon dioxide emissions with some 250 million tonnes in the EU by 2020 which is a considerable result in terms of our strive for sustainable development and combating climate change.

And about the SOLAR IMPULSE – Solvay is the First and Main Technology Partner of the zero fuel airplane. Products from Solvay Chemicals and Solvay Plastics are on board, contributing to more than 6 000 parts.

We have already exhibited a scale model of the airplane in our plant in Devnya during the Day of Chemistry (1/10/2011) and we are planning to show it again at the International Exhibition on Energy Efficiency and Renewable Energy (South-East European Exhibition), which will take place on 28-30 March 2012 in Sofia. We hope that many people will have the chance to visit our stand and withness this great example of innovation excellence.

We are also planning to organize a Solvay Innovation Award - a national competition which will reward the best innovation and sustainable development projects from university students with a scholarship for the Solvay Brussels School in Economics and Management.

"Solvay Sodi" has received awards in the national competition "Socially Responsible Company of the Year". What is the social policy of the company?

Solvay Sodi has the ambition to be one of the world leaders in sustainable chemical industry and to manage business in a spirit of good cooperation with society, local communities and with care for the environment, health and safety of its employees.

According to the principles of our Corporate Social Responsibility Strategy we are working closely with local administrations on joint projects in the educational, cultural, and health field. We actively support social facilities, schools, universities, and hospitals in the region.

As a result of our successes in the sphere of CSR, we have been awarded with a lot of prizes: