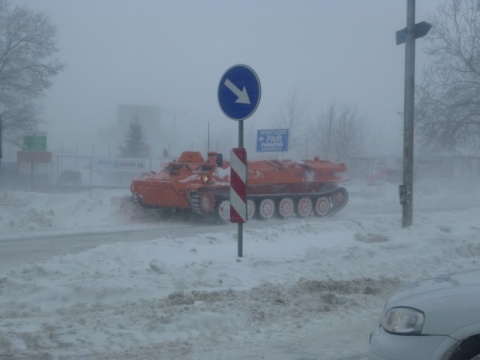 All roads in the northern Bulgarian region of Ruse have remained closed throughout Tuesday, as heavy snow with high winds rendered the situation unmanageable.

At the same time, heavy floods took the lives of 8 persons Monday in the southern region of Haskovo, as a dam wall broke near the village of Biser.

The situation in Kardzhali region in the south is also critical, with many rivers and reservoirs overflowing due to heavy precipitation and melting snow over the end of last week.

Tuesday winds as high as 100 km/h were reported north in Ruse, with visibility dropping as low as 3 meters.

The Danube Bridge crossing point to southern Romania, which is experiencinig similar winter conditions, has been closed througout the day.

Ice on the Danube river at Ruse has reached 60% of the surface, with 80% downstream at Silistra, and the river almost completely frozen further downstream in Romania.

Traffic on the river has been stopped, and vessels have been sheltered.

Many small settlements in the Ruse region have experienced power outages during the day. Food supplies are good at the present moment.