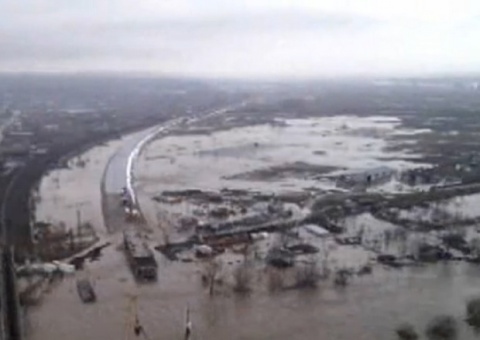 Greece has declared an emergency situation in the northern Evros province after heavy rains and melting snow caused the great Evros river to come out of its banks.

Floods started upstream in Bulgaria, where Evros is known as Maritsa, Monday.

Flooded rivers and broken dams caused 8 deaths in Bulgaria, which has announced a day of national mourning Wednesday.

Bulgarian authorities had warned neighboring Greece and Turkey about the incoming flood wave Monday, as almost all reservoirs in the south of Bulgaria are overflowing.

In Greece, a life has been claimed, unrelated to Bulgarian floods, after torrential rains and winds took away a 40-year-old UK citizen residing on the Dodecanese Island Simi, who was trying to escape from her home on a motorcycle.

The residents of four Greek villages in Evros near the Bulgarian border have been evacuated, with more evacuations being prepared if need arise.

Tuesday dykes around the Maritsa river near the Bulgarian town of Svilengrad were torn, causing additonal flooding.

Further west, electricity has been cut off for many households througout the Greek regions of Western Thrace and Macedonia.

Significant flooding has also taken place in central Thessalia, where crops have been damaged, and a section of the main road between Athens and Patras has been flooded.

Stormy seas have damaged port facilities in many Greek towns, way down to the Peloponnese.