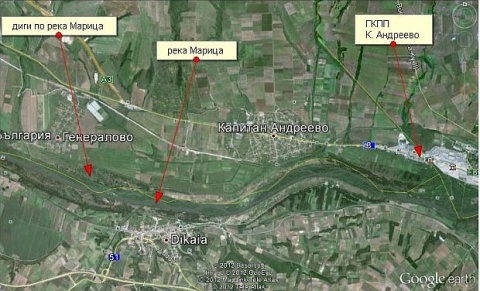 Map of the inundated region by GoogleEarth

The left dike of the Maritsa River has collapsed near the southern Bulgarian village of Generalovo, sending a huge flood wave in the direction of Kapitan Andreevo.

According to Haskovo District Governor Irena Uzunova, who is currently in the flood-hit village of Biser, the mayors of the nearby villages have been warned and Monday's massive flooding will not recur.

On Monday, the wall of the Ivanovo dam collapsed, killing eight people and causing massive damage in the village of Biser and its surroundings.

According to Nikolay Valchev from the Haskovo District Directorate for Fire Safety and Civil Protection, the flood wave does not constitute a threat to the population at this stage.

A number of rescue teams have already been dispatched to the location.

"According to initial reports from our officers who are on the spot, there is a railway line behind the dike, which is on the same level, and the water is accumulating in the area, which means that there is no risk for the population" Valchev told journalists.