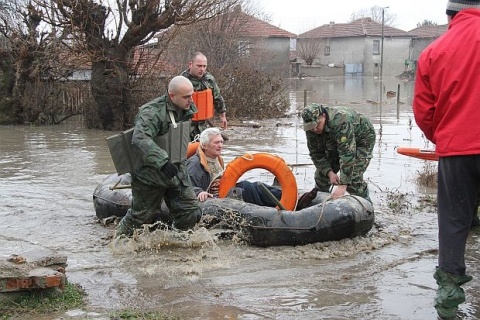 The village of Biser, Harmanli municipality, was hit by a massive flood Monday after a dam wall collapsed. Photo by dariknews.bg

The southern Bulgarian village of Biser, which suffered a massive flood Monday after a dam wall collapsed, is still struggling to recover from the disaster with the help of rescue teams from the Bulgarian Red Cross and the Ministries of Defense and Interior.

58 residents have been evacuated, eight have been confirmed dead, and the whereabouts of an elderly couple remain unknown, according to Irena Uzunova, Haskovo District Governor.

"A total of 58 have been evacuated, 26 have been accommodated at the hospital in Harmanli, and one of them wanted to leave because he said he was feeling well. Four have died in the village of Biser and two in the village of Ivanovo. Two people died after a bridge collapsed. The whereabouts of an elderly couple are unknown and they are out of touch. They were reported missing by their son on Monday," Uzunova announced in an interview for Tuesday's morning broadcast of private TV channel bTV.

She explained that the Harmanli municipality had been warned about the heavy precipitations and had taken all necessary measures to keep the situation under control.

"I cannot say whether there was or there was no human error. It remains a fact, however, that a huge ice block had formed in the middle of the dam wall. The huge chunk of ice exerted pressure on the wall, which may very well have been the cause of the accident," Uzunova declared.

"Water is very cruel. People say that you can fight fire with water, but there is nothing you can use to fight water", she noted.

The District Governor went on to say that the snow cover in the region was insignificant and no road closures were anticipated.

Rescue teams from Plovdiv, Stara Zagora and Kardzhali have been dispatched to Biser and the residents have been provided with about 5 tons of food while the recovery operations continue.