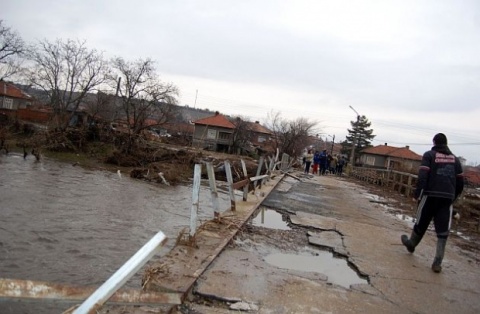 Bulgaria has declared its highest "Code Red" weather warning for the southern districts of Haskovo and Smolyan after Monday's massive flooding in the area.

According to reports of the Interior Ministry, the situation is most critical on the territory of the Haskovo district.

The flood unleashed in the village of Biser after a dam wall collapse took the lives of at least eight, possibly nine, people.

The town of Harmanli has also been swamped and controlled release of water from the Oreshetz reservoir is taking place.

The weather conditions are expected to deteriorate during the day, as Haskovo gears up for a heavy wet snowfall.

At the same time, the National Institute of Meteorology and Hydrology at the Bulgarian Academy of Sciences (NIMH-BAS) has warned about anticipated peak water levels in rivers.

The flooding has closed sections of the Haskovo-Svilengrad road between Lyubimets and Svilengrad and Harmanli and Lybumets. The traffic has been redirected to the Maritsa Highway.

The situation in Svilengrad is extremely difficult, with 75 people evacuated by Tuesday morning.

Two bridges in the Momchilgrad municipality have been closed due to erosion at the foundations.

A dam wall has collapsed between the villages of Okop and Kukorevo in the Yambol district but no victims or damages have been reported as a result of the accident.

The Ivaylovgrad and Knizhovnik dams are overflowing and controlled release of water is taking place from the Studen Kladenets and Trakiets dams.

Other major dams on the territory of the country, which are maintained by the National Electric Company (NEK) and the Irrigation Systems Company, have about 30% of free capacity and can take up additional water volumes.

The emergency situation in the Zlatograd and Nedelino municipalities has been revoked.

There is heavy snowfall in the districts of Kyustendil, Pazardzhik and Vidin.