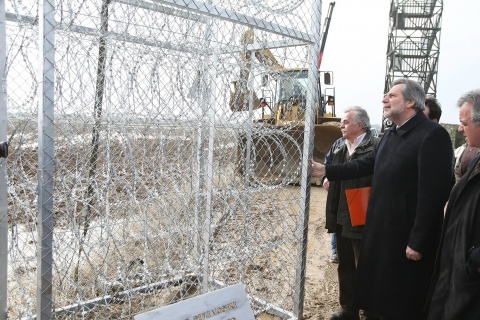 Greece said on Monday it has begun to construct a 12.5 kilometer fence along its land border with Turkey, intended to curb illegal immigration.

The structure in the north-eastern province of Evros - to be completed by late August or early September 2012 - is to consist of two parallel fences, topped with barbed wire and 25 thermal cameras.

"The fence is a project which has practical as well as symbolic importance ... it is intended to stop the country from being a transit route for illegal immigrants," said Greek Citizens' Protection Minister Christos Papoutsis, as cited by DPA.

The European Union has said that it will not fund the construction of the fence, insisting that it is not an effective form of curbing illegal immigration. The fence is estimated to cost the cash-strapped Greek government EUR 3 M.

The executive director of the EU's border monitoring agency Frontex, Ilikka Laitinen, has also said EU states contributing to a Frontex operation along the border were reluctant to continue their efforts, as Greek authorities had failed to set up new migrant detention centres as promised.

Some 54 974 undocumented migrants were caught crossing into Greece via its land border with Turkey in 2011.

Hundreds of illegal immigrants have frozen to death or drowned while trying to cross the river that marks Greece's northern border with Turkey.