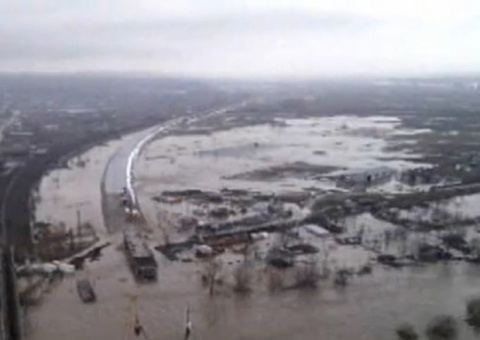 The major road leading from Bulgaria into Turkey has been flooded as a result of broken dams in Southeastern Bulgaria. Photo: Defense Ministry

The Bulgarian Border Police has shut down for traffic the Kapitan Andreevo crossing on the Bulgarian-Turkish border as a result of the floods that struck Southeastern Bulgaria on Monday.

As of 6 pm on February 6, 2012, the Kapitan Andreevo crossing was closed for any vehicles because of the flooding of the E-80 road leading to from Bulgaria's Sofia to Turkey's Istanbul by the Kalamitsa River.

The small river, which is a tributary of the larger Maritsa River, has flooded a 700-meter road section, leaving the road under 60 cm of water.

Bulgaria's authorities have started to redirect all traffic to Turkey to the Lesovo border crossing, which is located to the northeast of Kapitan Andrevo.

Bulgaria's government has notified Turkey's authorities to redirect all traffic to the Hamzabeili crossing, which is on the Turkish side of the border at Lesovo.

The Maritsa River has reached its maximum level to a river flow rate of 1200 cubic meters per second.

The mayor of Svilengrad declared a state of emergency after streets running along Maritsa's riverbanks were flooded.

A total of eight persons have drowned in Southeastern Bulgaria as a result of flooding caused by the breaking of local water reservoir dams, the Interior Ministry has confirmed.