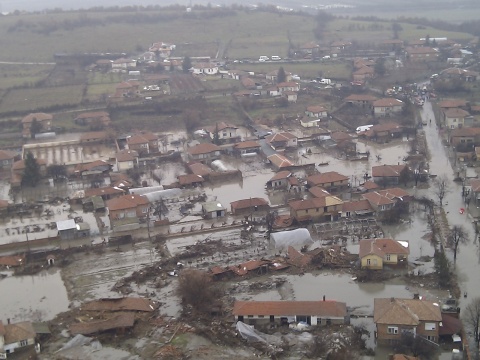 A view of the flooded area in Southeastern Bulgaria after the breaking of local dams. Photo by Defense Ministry

A total of eight persons have drowned in Southeastern Bulgaria as a result of flooding caused by the breaking of local water reservoir dams, the Interior Ministry has confirmed.

A total of four persons, of whom three are confirmed to be adult males, have perished in the village of Biser. A fourth corpse was yet to be identified as of Monday evening.

Local media in the city of Haskovo have reported two more casualties in the nearby village of Madzharovo, plus two casualties – a husband and a wife – who perished after their car got stuck on a nearby road, and was then hit by the wave caused by the breaking of a dike at the Ivanovo water reservoir.

Bulgaria's Prime Minister Boyko Borisov and Deputy PM and Interior Minister Tsvetan Tsvetanov visited the area of the floods, promising emergency aid and supplies to the locals, including warm food and clothing as well as vans for temporary housing.

"We are restoring the bridges that have been wiped out by the water. We are identifying the casualties. We are working with the electricity supplier to fix the damages as soon as the water recedes," Bulgaria Prime Minister said early Monday evening.

In his words, the military helicopter evacuation has saved 60 people from the flooded area. Borisov added that unfortunately many locals failed to believe the flood warnings issued by the village mayor.