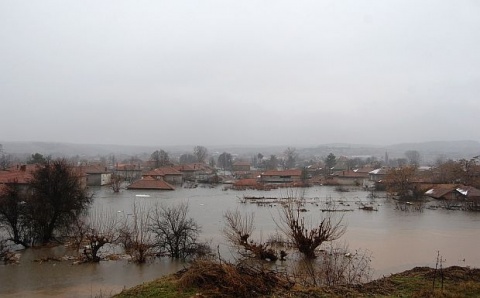 The rescue operation for the population of the flood-hit Haskovo municipality in southern Bulgaria continues despite the fact that the Cougar rescue helicopters are highly unsuitable for severe winter conditions.

In a Monday interview for the morning broadcast of the Bulgarian National Television (BNT), Prime Minister Boyko Borisov explained that Cougar helicopters were not fit to use in winter conditions because they had no anti-icing and de-icing system, meaning that it was quite possible for them to crash after takeoff.

"I wish the people courage! The problem is that Cougar helicopters, on which we have spent so much money, are not equipped with any form of anti-icing or de-icing system, which means that there is a huge risk of an engine failure after takeoff. The machines can reach an altitude of no more than 60 meters and cannot fly fast. At altitudes of over 60 meters the temperature is too low and the helicopters could freeze and plummet to the ground," Borisov stated.

He specified that the risk had nevertheless been taken and the helicopters had already headed for the crisis spot.

"We were also about to hit the ground at a certain point" Borisov noted, confirming that he was also flying to the flood-hit region.

"We have spent over BGN 500 000 on helicopters that can only fly in deserts and we can only use them to go to the beach in summertime," the Prime Minister said with indignation.

An emergency situation was declared in the entire Haskovo municipality after the wall of the Ivanovo dam broke and flooded the village of Biser.

Boats with divers of the local Civil Protection unit have already reached the village and over 30 people have been rescued.

Meanwhile, the citizens of the southern Bulgarian town of Zlatograd are ready to be evacuated, as the municipalities of Zlatograd and Nedelino are in a state of emergency due to heavy rainfalls and melting snow. Over 100 liters of rain per square meter have been registered in the region.

The southern Bulgarian municipalities of Kardzhali and Smolyan are under code red, as meteorologists have warned that floods are very likely to occur in the Rhodope region during the day.

The whole of western Bulgaria is under Code Orange, while most of the eastern part of the country is under Code yellow, as heavy snowfalls continue.