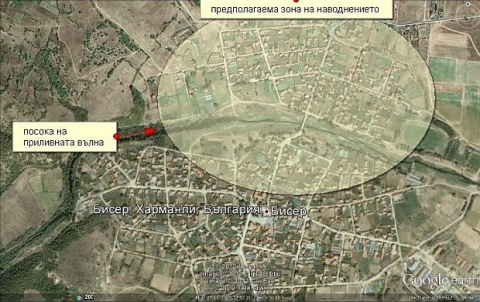 A map representing the allegedly fllooded area in the village of Biser. By Google Earth/dariknews.bg

A dam wall has burst near the southern Bulgarian village of Elena, located near the town of Haskovo, it emerged on Monday.

Earlier on Monday, another dam wall burst and flooded the village of Biser that is situated in the same region. One victim has been reported (a 90-year-old man, according to Darik radio), while some 12 people have been injured. The population of Biser is currently being evacuated.

According to the Bulgarian National Radio, there may have been three victims in Biser.

Two helicopters have been sent to help the distressed citizens in the Haskovo region. Due to the complicated weather conditions, the helicopters will not try to land and will initially maneuver in the air instead.

A lot of communities in the Haskovo region have been flooded, Haskovo Regional Governor Irena Uzunova has informed. All forces able to help the distressed have been mobilized.

The people residing in the nearby villages have been advised to move to the upper parts of their buildings.

The village of Leshnikovo near Harmanli has been evacuated due to the flood waves.

The whole Haskovo region is currently under emergency. Bulgarian Prime Minister Boyko Borisov is expected to arrive in the disaster-stricken area.

The southern Bulgarian municipalities of Kardzhali and Smolyan are under Code Red, as meteorologists have warned that floods are very likely to occur in the Rhodope region during the day because of heavy rainfalls and melting snow.