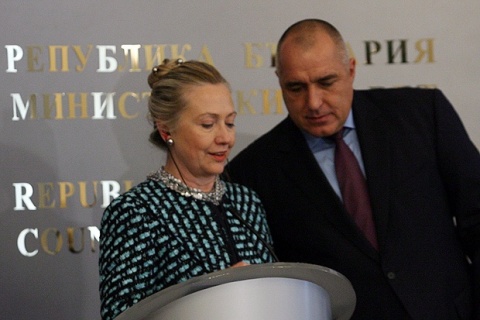 I promise to the Bulgarian people that the United States will be forever with them, as we have been in the past, stated US Secretary of State Hillary Clinton in Sofia.

"It is a great honor for me to be again in this beautiful country and to be able to demonstrate again our strong partnership," added Clinton after meeting Bulgarian PM Boyko Borisov and members of the cabinet

The US Secretary of State said that Bulgaria has effected its transition from an authoritarian regime to democracy in an exemplary way.

"It is a great pleasure to see the progress you achieved in deepening democracy," said Clinton, adding that countries from the Arab World could learn from Bulgaria.

In addition, she commended the work of Bulgarian police and security forces, and their cooperation with their American counterparts.

"Our joint operations against drugs succeeded in stopping drugs for over USD 3 B. Our cooperation led to the arrest of hackers," said Clinton as an example.

The US Secretary of State also commended Bulgaria for the help it is offering in NATO, especially Afghanistan, and assured she felt deeply about the losses of the Bulgarian Army.