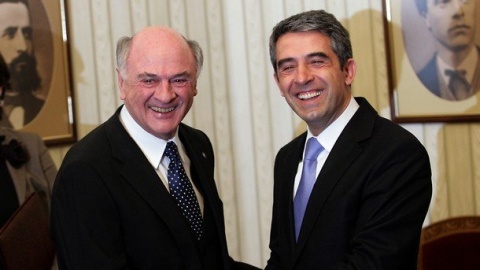 The Governer of Lower Austria, Edwin Proll (l) and Bulgarian President, Rosen Pleveneliev during their meeting in Sofia. Photo by BGNES

Proll spoke after his Friday meeting in Sofia with the new Bulgarian President, Rosen Pleveneliev.

Plevneliev stated that the project is of prime importance to Bulgaria and the investment is crucial, especially in time of crisis and in an underdeveloped region of the country.

Proll stressed that the joint project of the Austrian EVN, which is also one of the three power utilities in Bulgaria, and of the Bulgarian National Electric Company, NEK, is valued at EUR 0.5 M and the investment will create hundreds of new job openings in the region of the Eastern Rhodoppes.

On other topics, Proll declared that Lower Austria also supports Bulgaria's joining of Schengen because the membership will help solve the problem of human trafficking to Central and Western Europe, since its main road passes through Bulgaria.

The Austrian politician also said that the province is considering investing further in the energy sector and in the infrastructure in the country.

Plevneliev explained that the Greek debt crisis should not trigger problems in Bulgaria's bank system since Greek banks in Bulgaria are independent and controlled by the Central Bank. He stressed Bulgaria will apply all effort to support Greece's attempts to avoid bankruptcy because the southern neighbor is an important partner.

In July 2010, Austrian utility EVN signed a deal with Bulgaria's state power utility NEK to take a majority stake in the Bulgarian hydropower project. Under the agreement Austrian utility EVN will own a 70% stake, while NEK will hold the remaining 30% in the joint venture. The agreement was sealed during the visit of Prime Minister Boyko Borisov in Vienna.

Austria's Alpine Bau withdrew from the construction of Gorna Arda hydropower project in the middle of May that year, leaving energy firm EVN, which holds a 67% stake in one of Bulgaria's three power distributors and serves clients in Southwestern Bulgaria, the sole partner of NEK.

This was a requirement for wrapping up of the sale of a 30.1% stake, owned by Turkey's CCG, part of the Ceylan conglomerate, to an Austrian consortium of EVN and Alpine Bau.

In July 2011, EVN approved a capital hike to boost its stake in the Bulgarian hydro power plant project Gorna Arda to 70%.