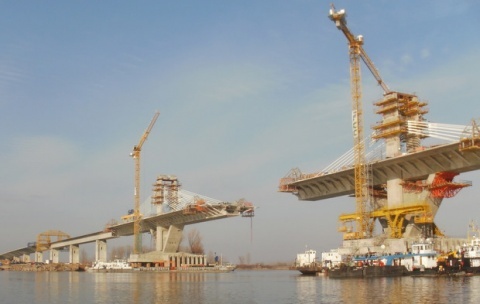 The second Bulgaria-Romania bridge should be completed by the end of 2012. Photo by danubebridge2.com

Bulgaria's Prime Minister Boyko Borisov will personally inspect the construction of the so-called Danube Bridge 2 between Bulgaria and Romania each month, it has been made clear.

"I wasn't to know what these companies that receive so much money are doing every day," the Prime Minister declared during the latest Council of Ministers sitting.

On Wednesday, the Bulgarian government decided to draw EUR 50 M out of the total of EUR 70 M European Investment Bank loan provided for the construction of the project.

The Bulgarian government recently agreed that he sum of EUR 25.7 M will be added to the total cost of the construction of the second bridge linking Bulgaria and Romania across the Danube River

The bridge will finally be completed by the end of November 2012, Bulgaria's Transport Ministry announced in a statement last Friday as the Bulgarian Parliament voted to approve the measures taken by Transport Minister Ivaylo Moskovski over the past two years in order to ensure the completion of the bridge between Bulgaria's Vidin and Romania's Calafat.

If the bridge is not completed by the end of the year Bulgaria will lose a total of EUR 70 M in gratuitous financial help provided by ISPA.