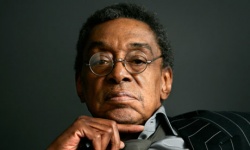 "Before MTV there was 'Soul Train,' that will be the great legacy of Don Cornelius," Quincy Jones said. Photo by CNN

The creator of the long-running US TV show Soul Train has shot himself at his Los Angeles home, police said.

Don Cornelius, 75, was pronounced dead on Wednesday morning after police answered reports of gunshots at his home around 04:00 (12:00 GMT).

Gladys Knight, who performed on the pilot of the show more than four decades ago, said Cornelius "opened up so many avenues for African-American artists."

In an interview with CNN Wednesday, Knight said he appeared in ill health when she saw him recently.

"Last time I saw him, he was pretty sick," Knight said. "He had lost a lot of weight, but he still had that thing about him."

"Don Cornelius single-handedly brought about a melding and unity of brother and sisterhood among young adults worldwide and globally with the unforgettable creation of 'Soul Train,'" Franklin said.

Soul Train began in Chicago in 1970 but aired nationally from 1971 to 2006, showcasing artists such as Aretha Franklin, Marvin Gaye and Barry White.

Cornelius stepped down as host of the hit show in 1993.

"I'm... trying to avoid saying there was no television for black folks, which they knew was for them," Cornelius said of the show in 2006.

Initially, the show was seen by some as a black answer to American Bandstand, a music show presented by Dick Clark.

American Bandstand sometimes featured very mainstream African-American artists, but Soul Train created a platform for black artists who might not have had the opportunity to appear on American Bandstand.

But Soul Train remained popular long after black musicians became part of mainstream music and culture in the US.

"I figured as long as the music stayed hot and important and good, that there would always be a reason for Soul Train," Cornelius added.

Cornelius was awarded a place in the Broadcasting and Cable Hall of Fame in 1995 and has a star on the Walk of Fame in Hollywood.

'Soul Train' aired until 2006, making it the longest running U.S. series in first run syndication. Cornelius sold the franchise in 2008.

Paying tribute to him, music producer Quincy Jones said: "Don was a visionary pioneer and a giant in our business.

Quincy Jones said that he was "deeply saddened" at the sudden passing of his friend, colleague and business partner.

"Before MTV there was 'Soul Train,' that will be the great legacy of Don Cornelius," he said. "His contributions to television, music and our culture as a whole will never be matched."

Long-time friend Rev. Al Sharpton expressed shock and grief over the news of the death.

"He brought soul music and dance to the world in a way that it had never been shown and he was a cultural game changer on a global level," he said in a statement.