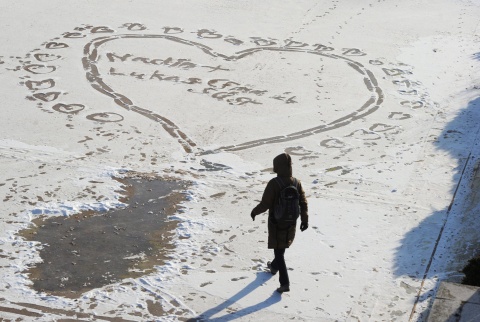 A woman walks past a heart paintied into the snow in front of the Haus der Kulturen der Welt in Berlin, Germany. Photo by EPA/BGENS

The deadly cold snap, which claimed at least 60 lives in Eastern Europe, has begun to move west, causing traffic disruptions in Switzerland and Italy.

In central Italy, heavy goods lorries were barred from motorways and several top-flight football matches have fallen victim to the wintry conditions.

German media reported that ice and sub-zero temperatures had led to the deaths of two women: a pedestrian froze after falling into a drainage ditch and a driver was killed when she lost control of her car on an icy road.

The freeze that has swept south through the continent has caused at least 70 deaths, mainly in Ukraine and Poland.

Bulgaria and the southern parts of the continent have not been spared.

Temperatures in the town of Sevlievo, northern Bulgaria, plunged Wednesday morning to minus 31.4 C, a record low, which made the region one of the hardest hit by the severe cold spell in Eastern Europe.

On Wednesday, due to heavy snow cover and clear skies, 16 towns in Bulgaria recorded their coldest temperature since records started 100 years ago.

In the northeastern town of Knezha, the national weather service reported a low of minus 29 degrees, an absolute all time record, registered for the second day in a row.

At most locations temperatures were below 20, including the capital Sofia.

All Bulgarian regions, except the coastal region of Burgas, are under code orange over extremely low temperatures, the National Institute for Meteorology and Hydrology at the Bulgarian Academy of Sciences (BAS) announced.

Cold weather and heavy snow are believed to have caused the death of at least five Bulgarians in the country's mountainous region since the beginning of the new year.

Eastern Europe shivered this week in the coldest conditions seen this winter, with below-freezing temperatures and heavy snowfall leading to deaths, frostbite and widespread travel disruption.

The cold snap, according to forecasters, is due to an area of high pressure that has extended across Europe from Siberia and is expected to reach its peak at the weekend.