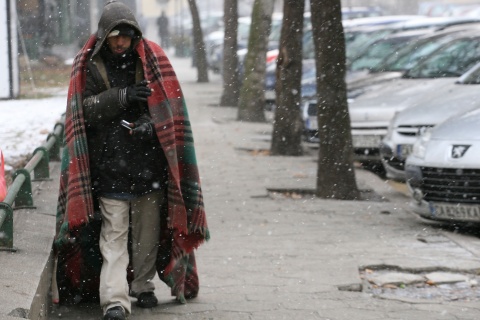 A homeless man walks along the street in Bulgaria’s capital in the freezing cold. The mercury dropped to 20 degrees Celsius below zero in Sofia on Tuesday morning. Photo by BGNES

The winter cold snap in Bulgaria has killed another two as temperatures dropped to record lows, schools closed down, roads became impassable and power supplies were cut off.

A 62-year-old man and a 55-year-old woman froze to death in a southwestern and northern village respectively. The latest victims of the cold were discovered in the early hours on Tuesday and follow the deaths of another two men a day earlier.

Cold weather and heavy snow are believed to have caused the death of three men in a mountainous region near the town of Smolyan, Southern Bulgaria, at the beginning of January, and one elderly man in Sofia last week.

The country witnessed an historic cold snap on Tuesday, recording a wind chill of 29 degrees Celsius below zero in the town of Knezha, Northern Bulgaria.

In the early mornings the mercury plunged on average to 20 degrees Celsius below zero, particularly in western Bulgaria.

In all, at least 58 people have died from the cold in Europe over the last week.