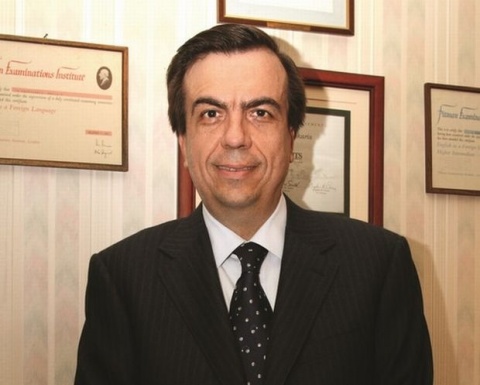 Exclusive interview with Gerasimos Perdikaris, General Manager of the Sheraton Sofia Hotel Balkan, for the "Investors of the Decade" Business Survey of Novinite.com (Sofia News Agency) and Novinite.bg.

How did you arrive where you are now, i.e. at the position of the General Manager of the Sheraton in Sofia?

I came here in June 2009. Before that I was in Asia for 15 years in this field of business. And before going to Asia, I was in London for 6 years so my career in the hotel business spans over a period of 23 years. I've been a General Manager for ten years now, always in city five-star hotels.

You've managed the Sheraton Sofia Hotel Balkan for 2.5 years now. How has the Bulgarian capital Sofia changed in that period in terms of business?

It's evident that Sofia has been affected by the global crisis from the point of view of business travel after 2009-2010. 2011 seemed to be a little better at beginning, and now the expectations for 2012 are moderate.

From my point of view, we have a major challenge in the city of Sofia with respect to five-star hotels because hotel rates are very depressed. They are not where they should be.

The rates in Sofia are not the same as they are in Vienna, Prague, Budapest, or even Bucharest. We are in the low-end Eastern European market. From the viewpoint of investment, that makes it very difficult. There are a lot of five-star hotels in the city, and there is big competition. The supply and the demand are not evenly balanced.

Also, Sofia is a very seasonal market with a lot of gaps: January, February, July, August. It is a market that is very challenging because the competition is very high, and people's expectations about the rates are actually for even lower rates, so it is very tough.

What are the comparative advantages of the Sheraton Sofia Hotel Balkan in this tough market?

I would say we have several major advantages: the location; the facilities that we have – the hotel is great; our banquet halls are also great and are doing very well, and are in great demand; we also have solid skill in terms of providing services, which is another strong point that we have; our brand – Luxury Collection by Starwood Hotels and Resorts – is very strong so it helps us attract a lot of members from the network.

You are now marking the 25th anniversary of the Sheraton Sofia Hotel Balkan. How would you say that the Sheraton in Sofia has changed and progressed over the course of this 25-year period? That is a quarter of century.

Yes, we are about to celebrate it – we have 25 years in Bulgaria. In the spirit of that, we have organized a number of food festivals. We have combined it with the rotating EU Presidency – Hungary in the first half of 2011, Poland in the second half of 2012; we also had an Italian Food Festival, a Greek Food Festival, and we intend to continue to organize these food festivals throughout 2012.

I think that the Sheraton Sofia Hotel Balkan is a landmark in Bulgaria's capital in terms of history, architecture, reputation, and profile.

And I think that in the minds of the local people it brings very strong memories. For example, there are a lot of people who got married here. Many prominent people in Sofia are known to have proposed to their wives at the Sheraton restaurant. For a lot of people it holds a lot of memories.

Building upon that, how do you view the Sheraton's role in the Bulgarian social life today?

It's a hotel in which you need to strive every single day to make the guests happy because there are so many events going on at the same time. Our occupancy of the rooms is constantly very high, we have a lot of VIP events, government delegations, prime ministers and heads of state are coming in all the time.

This is a hotel in which you have to be focused every single day on what you are doing. It is a constant challenge, and it is one that we welcome because the brand sets certain expectations and responsibilities.

What does the intensity of such events that you host tell you about the state and prospects of the Bulgarian economy?

There is a certain amount of intensity, a momentum in the city of Sofia. One has to recognize that. There are a lot of things developing in the city.

There are entire sectors that are progressing such as the energy sector, the IT sector, the pharmaceutical companies, outsourcing companies. Bulgarian export-oriented companies are doing very well.

The negative part of the picture is the big European crisis, which has affected our business. For example, the Greek market has been affected, and that is why we have tried to counterbalance this with other markets in the area.

How has that worked out?

It has actually worked out quite well. We have maintained our market share for 2011. In fact, we have increased it a bit. So we are looking forward to 2012 with positive expectations. The signs are good but we are realistically cautious.

What is you view of the business environment in Bulgaria? What would you say to a guest of the Sheraton who might ask you for advise on the prospects and trends in country?

Bulgarians are now coming out of their shells, to put it this way. Many have already traveled a lot. I think the future is good for Sofia and Bulgaria.

But what see here right now is a process of development. We see that the government is focusing on the economy and business development, which is very positive.

But, once again, it is surrounded by the European crisis, which makes the international environment challenging. Bulgaria needs to keep its momentum within this difficult environment.

I actually have some Bulgarian blood in my veins. My great-grandfather was from Plovdiv. I do understand Bulgarian quite a bit by now even though I don't speak it. It is a challenging language.

I feel comfortable in Bulgaria. It feels like home. It is a safe country. My family has settled in well. It helps that Bulgaria is very close to Greece so whenever my family feels like it, they can go to Greece. It is like I live in Thessaloniki, it doesn't feel that much like living abroad. Although I have been an expatriate for 20 years, about half of my life, so the expat experience doesn't bother me at all anyway.

Now that you've been in charge of the Sheraton Sofia Hotel Balkan for a while, where do you wish to take the hotel from here?

We have to keep doing the things that we have done great in the past. We have to focus on the guests – the service, the food, the high-quality standards that we offer. In the past three years, we have improved the guest satisfaction index by a great margin. We have also had monitoring via the Starwood mystery guest system.

Financially speaking, we need to keep improving the profitability of the hotel and to maintain our costs at the proper level because as I told you at the beginning, the rates in Sofia are very depressed, therefore, we need to be very careful with our margins. We have to keep a very close eye on the business market, on what's happening with companies that are moving in.

There is a constant push for sales in order to increase our occupancy, market share, and profitability, so we need to keep looking for new markets without neglecting what we already have, and at the same time to keep improving on the banquet revenues of the hotel because as you know we have one of the biggest banquet facilities in the city.

Two years ago, you told me that running a five-star hotel is like playing tennis. Do you still think that way?

But I would also add that when you are in a market such as Sofia, which is very small and very competitive, and very fluid – things can change fast with the current crisis in Europe – one has to be far more alert on the sale and corporate side. One cannot afford to skip a day without knowing what's happening on the market, and without talking to guests, and visiting your customers. So you have to have your eyes on the business all the time.