EBRD - Investment with a Difference 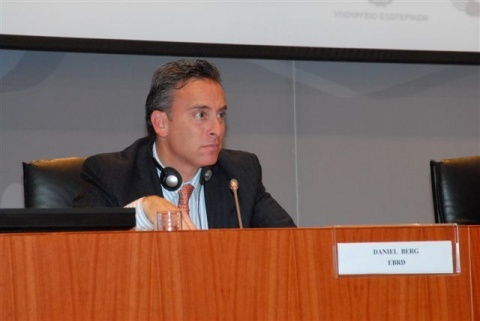 Presentation of the European Bank for Reconstruction and Development in Bulgaria by EBRD Bulgaria Country Director Daniel Berg - for the "Investors of the Decade" Business Survey of Novinite.com (Sofia News Agency) and Novinite.bg

Formed during the demise of the Soviet system, the European Bank for Reconstruction and Development was giving a unique mandate – to foster transition in Eastern Europe through project finance, primarily in the private sector.

Besides transition, the EBRD is the first multilateral financial lender whose founding documents emphasise the need to support environmental and sustainable development in all operations.

The Bank was given flexibility to achieve these objectives by working with both government-owned borrowers and private ones. The EBRD strives to ensure the highest quality in each of these areas.

We are proud of the significant impact the Bank has made toward transition in Bulgaria over twenty years and more specifically during the last decade. Since the start of its operations, the Bank financed more than 200 projects in Bulgaria, investing over EUR 2.5 B in the key sectors of the economy.

Each euro from EBRD attracted at least another two euros from other investors and co-lenders, meaning the total value of the EBRD funded projects exceeded EUR 8.3 B. Over 90% of the EBRD's investment in Bulgaria is in the private sector.

These investments played a role in helping Bulgaria reached a stage of transition comparable to countries in central Europe and the Baltics which have joined the EU during the 2000s. EBRD projects have helped Bulgaria achieve high transition scores (as measured each year in the EBRD Transition Report) in a range of sectors, notably in the corporate sector, electric power and micro, small and medium enterprises.

In the past decade, high profile EBRD projects in Bulgaria include:

EUR 47.5 M loan provided in 2010 to KCM AD, the largest lead and zinc smelter in Bulgaria, to help increase the company's energy efficiency and improve its environmental profile

Rimini gas – a EUR 30 M investment in gas distribution in the Central and Southeast of Bulgaria.

Maritsa East 1 power company – the largest power investment, allowing for the clean use of Bulgaria's coal.

Burgas Water – Was one of five loans to water companies designed to improve performance and increase efficiency.

Callpoint – the first investment in Bulgaria under the Local Enterprise Facility LEF deal. The project allows for the further development of the business process outsourcing company.

Through these and other investments, EBRD has supported Bulgaria's reform plans and advanced economic development and the business environment. Although proud of our accomplishments, we all acknowledge that there is more to be done (particularly in the current uncertain environment) and I, personally, believe the Bank has an important role in Bulgaria and in the region for some years to come.

Therefore, the Bank will continue to support Bulgaria as it addresses remaining transition challenges, which amongst others include restructuring the power sector and improving its energy efficiency, developing greater export capacity as well as further strengthening of the infrastructure and financial sectors.