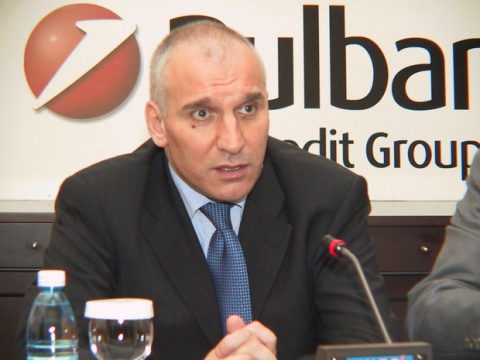 Exclusive interview with UniCredit Bulbank CEO Levon Hampartzoumian for the "Investors of the Decade" Business Survey of Novinite.com (Sofia News Agency) and Novinite.bg.

Does Bulgaria's banking system continue to perform well despite increasing bad loans, faltering economy and "the elephant in the room" – the eurozone debt crisis?

In the middle of December the international rating agency Standard and Poor's confirmed the long-term and the short-term credit rating of UniCredit Bulbank at BBB/A-3, outlook stable.

This is the highest credit rating given to a Bulgarian bank and is identical to the rating of Bulgaria, the so-called sovereign rating. This is the highest possible rating a bank can receive in a country and this is a confirmation of how good our performance is. UniCredit Bulbank is the leading bank on the Bulgarian market and even though the other banks are not as good as we are, they are stable as well.

Whom should we thank for having a stable banking system – the new order imposed after the banking crisis from 1996-97 or the central bank and the finance minister?

The stability of Bulgaria's banking system has always been the result of a combination of organized structural effort. In the first place by those who designed the Currency Board and those who implemented the new regulations in the banking – the Bulgarian National Bank and to some extent the Finance Ministry.

Secondly, by the four consecutive governments, who were persistent in implementing strong financial discipline, keeping the budget deficit under control and creating buffers, which proved to be extremely helpful during the crisis years.

UniCredit Bulbank, part of the UniCredit Group, is the largest bank in the system and a market leader. What types of projects does the bank continue to finance? What has changed in comparison with 2007-2008 in terms of requirements and financial cost?

We are able to support our existing clients, but of course today the conditions for financing and the requirements for the bankability of a project are higher than before the crisis. Enthusiasm of businesses for credits is lower, while prices are slightly higher.

The financial cost for taking loans is slightly increased to cover the increased risk in the environment. We can support our clients in another bad or another good year, depending on how things are going to develop.

How do these changes modify the relations between banks and clients?

Clients appreciate our efforts. Figures show that banking profits have shrunk in the past couple of years, which means that the banks are taking on their shoulders part of the difficulties in the environment.

Being subsidiaries of foreign banks, the banks in Bulgaria are directly linked to the well-being of mother companies. Half a year ago you said that was not a problem as the parent companies came from eurozone countries, they were well-capitalized and willing to support the local entities. How would you comment on that statement today?

Therefore we have enough cushions to absorb some shocks on the market. The ability for this is not unlimited but hopefully there will be a resolution in the coming months, which will increase the predictability in the economic environment in Europe.

The crisis is not going to be resolved in weeks and months, it will take years. If however the environment is predictable, this will be the first condition, which will allow businesses to plan their actions and development. Accordingly the banks will be able adapt to this.

Predictability, macroeconomic stability and low cost of doing business are Bulgaria's advantages, which should be promoted better abroad. But are these factors sufficient for attracting investments?

You need friendly environment to entrepreneurs – both Bulgarian and foreign, which involves a lot of things different from low taxes – efficient judiciary, overall performance of the administration, cutting red tape, better education, including special effort in the area of vocational education. Foreign investors don't need only doctors, engineers and super stars – they need qualified workforce, the supply chain for which dried up in the past twenty years.

Investments in Bulgaria contracted and exports weakened this year, while the gloomy outlook in the eurozone - Bulgaria's key export destination – does not give grounds for optimism for 2012. What should the country do to meet the challenges the next couple of years will bring?

Once the environment in the eurozone becomes predictable, this will signal improvement in the investment activity. Nowadays the major drawback is not macroeconomics since it does not directly affect the performance of companies, but the uncertainty, which makes everyone go into a wait-and-see mode, postpone investments and consumption.

For Bulgaria meeting the challenges of the next two years will be a matter of sustainable development and good reputation. Bulgaria should become a friendly place for businesses and a nice place to live in.

Provided that these two conditions are met it will naturally attract the attention of local and foreign investors, of educated young people, who will choose Bulgaria as the place to be. Tourists will also be more than happy to be here because they will find good value for their money.

Bulgaria also has to make significant efforts to improve its reputation, which is the most difficult task. A couple of delegations sent abroad or a few exhibitions with archeological finds from Bulgaria can not change a county's image.

Do you expect the biggest western lenders in Bulgaria and the Balkans to withdraw or they will continue to see the emerging market here as attractive and will be reluctant to give up space?

Bulgaria will continue to be attractive for western lenders until they can make good returns on their investments. Once they see that the conditions for making good returns have worsened, they can have a second thought. How events will unfold depends on the performance of the real economy, which is not tied up solely with the efforts of the government or the situation in the EU. It is up to the entrepreneurship of each and every Bulgarian or those who have chosen to do business in Bulgaria. We should not throw the blame for all our woes on the crisis.

In mid-term the crisis is healthy as it will help clean the blackboard – the weak players are going to disappear, while only the most successful will stay or reappear. Of course for this to happen we need to see the necessary structural reforms implemented. The solution is not a list of measures or an action plan, but a systematic effort on behalf of everyone of us, including those who have been elected to represent the executive power in the country.

What will it take for the European Union to tackle the eurozone debt crisis and make so that it works better as a true union?

It is clear that we need a new set up, which will involve a much larger degree of integration, responsibility over local budgets, giving up part of the local discretion for the sake of a more efficient union.

Bulgaria is too small to be a factor in the EU economy, but can it benefit from these changes?

Bulgaria can definitely benefit if the European Union becomes stronger and more efficient.

What is the best way to describe what we are experiencing today – a crisis, a return to normality or a new world with more pragmatism?

This is definitely a period of reforms, imposed by external circumstances.

How would you describe the dynamics in investments in Bulgaria over the last decade?

The country entered the decade just as it came out of a severe crisis and a lot of heavy structural reforms, which were implemented during the last years of the previous century. Combined with the overall positive development in the global economy it was a fantastic period for investments in Bulgaria.

However the crisis brought all this to a halt. Bulgaria's economy performed reasonably well during the crisis, not spectacularly, but it could have been much worse. The challenge now is to make investors – both local and foreign – look at opportunities in Bulgaria. This won't be an easy task as the region as a whole is much less attractive when compared with the usual suspects – China, Mexico, Brazil, India and Vietnam.