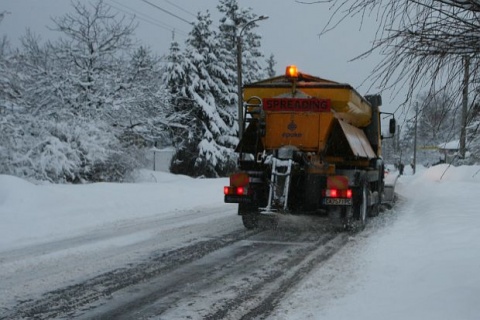 Over the course of the weekend, a number of roads across the country will still experience obstructions due to heavy snowfall. Photo by Sofia Photo Agency

Twenty six Bulgarian regions are under code yellow Saturday over snow and freezing cold, the National Institute for Meteorology and Hydrology at the Bulgarian Academy of Sciences (BAS) announced.

Only the regions of Kyustendil and Blagoevgrad are under code green.

The situation, in the aftermath of the blizzard that hit Bulgaria mid-week, remains serious. 10 municipalities – either near Sofia or in northeaster Bulgaria are still under an emergency situation. 24 settlements remain without electric power – mainly in the regions of Smolyan and Kardzhali in the Rhodoppe mountains, where 1 500 customers of the power utility EVN are in the dark. 28 EVN emergency teams are working to repair the damage.

Teams of Civil Defense, Fire Rescue Services and police are working round-the-clock to clean the roads and rescue people in automobiles stuck in snow drifts or those in need of hospitalization.

Roads across the country are passable, under winter weather conditions, the Road Infrastructure Agency informs. Road surfaces are wet and icy in higher elevations.

All traffic in the Dobrich Region remains banned over the snow-covered roads, in exception to the roads between Dobrich and Varna and between Dobrich and Balchik. Tractor trailers of over 10 tons are banned in four regions – Varna, Burgas, Silistra and Dobrich. The ban has been lifted for the rest of Bulgaria.

A number of mountain passes in the Stara Planina (Balkan) mountain rage remain closed; tractor trailers are banned and tire chains are required for the open ones such as "Republica,""Shipka" and "Petrohan."

Tire chains are also required on the now-reopened road between Varna and Burgas, in the "Sunny Beach" – Obzor section.

For next week, the forecast is for an historic cold snap, recording a wind chill of 20 degrees Celsius below zero.