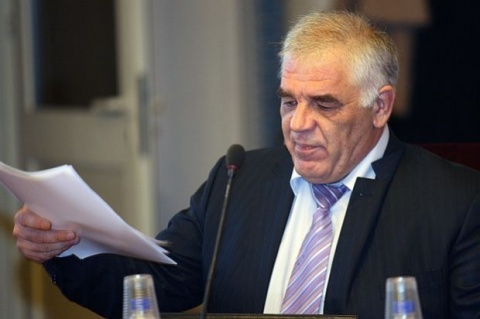 Customs Agency head Vanyo Tanov boasted of optimization measures at the unit in an interview on the occasion of the World Customs Day. Photo by Sofia Photo Agency

"We got positive estimates both from the EU and in the OLAF report. Since the beginning of 2012, forty pre-trial proceedings have been opened for smuggling of excise goods. Six of them have resulted in suspended sentences. In the case of a second offence, these people will go to jail. This shows that customs officers are working actively," Tanov said Thursday during the morning broadcast of private TV station bTV.

Commenting the the work of the Customs Agency in 2011 and 2012, Tanov admitted that it was difficult to motivate employees whose salaries were relatively low compared to the numerous "temptations" to which their job exposed them.

The Customs Agency head explained that the unit had dismissed many employees in the past two years over suspicions that they were taking bribes.

"The motivation of the customs officers currently employed is achieved through very tight control in the first place, and through pay rises," Tanov explained.

He said that pay increases had been made possible by an optimization of the structure of the customs administration, including staff cuts and the closure of low-efficiency units.

Tanov specified that incomes of Customs Agency officials had grown by BGN 200 in two years as a result of the measures.

Commenting on the Tapegate trial, which had to identify the cause of the leak of surveillance data but was suspended Monday on the grounds of an unknown offender, Tanov suggested that the prosecution had been subjected to pressure, but refused to mention the source.

"I managed to figure out the case for myself throughout this year. It is only normal to open an inspection when a tip-off arrives that somebody is engaged in an embezzlement scheme or some other offence. I was wiretapped due to a signal submitted by dismissed Customs Agency employees, who wrote that customs officers were collecting money and were taking them to senior officials. Fair enough, I got wiretapped. They saw that the information was unfounded. So far, so good. I cannot understand, however, why they went on with the wiretapping and even got members of my family involved," Tanov reasoned.

He specified that he had in mind the attempt to make his son appear a smuggler by planting drugs in his apartment and illegal cigarettes in his car.

Tanov said that he had managed to thwart the planned sabotage act because he had obtained information about it.

"I have been in Sofia for two years and a half and I have never had a tete-a-tete meeting outside the Customs. All my meetings with business representatives have been held in the company of witnesses. So I have nothing to be ashamed of about my actions", the Tanov declared.

Mihov died on March 30, 2011 after suffering a severe heart attack.

The source of the tapes and the method of recording remained an open, yet hugely debated question.

The Bulgarian Academy of Sciences (BAS) confirmed that the recordings had been made using legitimate special surveillance devices but their release by the services had been illegal.

BAS said that the taped had been manipulated but refused to commit to forecasts about tampering of the content..

Meanwhile, independent French laboratory Lipsadon confirmed the authenticity of the tapes sent by the Galeria newspaper.

During a press conference, Dachkov said he would file a civil lawsuit against Borisov over the Prime Minister's claims that Dachkov had been involved in the manipulation of the leaked phone conversations.

The journalist insisted that the tapes were authentic surveillance data gathered by the Interior Ministry during an investigation of Vanyo Tanov.

He explained that the tapes had been accessible for officials of the State Agency for National Security (DANS), who had recorded them using a simple sound recording device.

Dachkov said that the events had been part of a racketeering scheme which had been practiced for years by the top brass at DANS to exert pressure over businessmen and politicians.

He further claimed that the Deputy Director of DANS and the former Director of the service had been fully aware of the scam and had taken advantage of it.