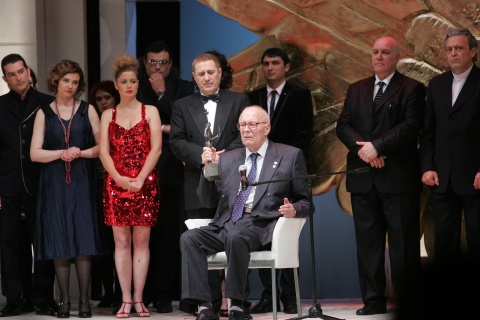 In 2011, Kosta Tsonev received the Askeer award for his overall contribution to Bulgarian cinema and theater. Photo by BGNES

Kosta Tsonev, one of the most beloved Bulgarian actors, has passed away at the age of 82, his family announced.

Some of his most memorable roles were in cult Bulgarian films and TV series: "John Asen's Weddings", "There Is Nothing Better than Bad Weather", "Mr. Nobody", "Die as a Last Resort", "Be Happy, Annie", "A Dog Story without a Dog", "A Home for Our Children".

In 2001, Tsonev entered politics as a Member of Parliament from the National Movement for Stability and Prosperity of former Bulgarian Tsar and PM Simeon Saxe-Coburg.

In 2005-2009, he was reelected to the Bulgarian Parliament on the NMSP ticket from the Sliven District.