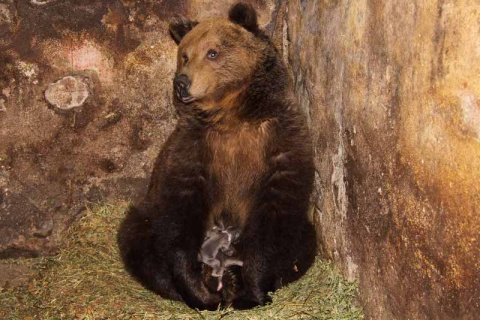 A 15-year-old brown bear called Bella has given birth to three cubs in the Ayazmoto park zoo in the Southern Bulgarian city of Stara Zagora.

The bear gave birth on January 14, 2012, but it was only on Wednesday, January 25, that the zoo attendants discovered how many cubs she has this time.

Bella has been giving birth each January, and this is her tenth time. Each of the three cubs is estimated to weigh about 300 g., the Stara Zagora municipality announced.

Zoo manager Radoslav Mihaylov commented that bears usually give birth every other year but that Bella has been giving birth every year since she came to the Stara Zagora zoo.

She was brought to the zoo in 2002, after having a "career" at a Sofia circus. Mihaylov says Bella and her partner have already had more than 20 cubs.

Most of their kids have been sent to other zoos in exchange for other animals, which is how the Stara Zagora zoo got tigers, Australian emu, a lynx, among others.

The Stara Zagora zoo, founded in 1957, is one of the largest in Bulgaria, and is licensed to breed wild animals away from their natural habitats.

Visitors of the Stara Zagora zoo can see some 400 animals from 80 species on a plot of 60 acres.