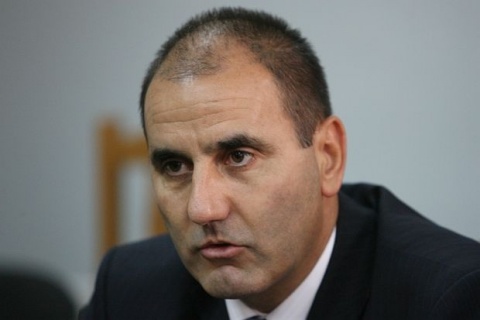 Interior Minister Tsvetanov presented details about the January 03 rape of a student at a press conference on Wednesday. Photo by Sofia Photo Agency

The suspect detained in connection with the January 03 rape of a 23-year-old student is a 53-year-old Syrian national who entered Bulgaria illegally in May, Interior Minister Tsvetanov announced Wednesday.

The crime was committed on January 03, but the accident gained publicity one week later.

On her way home after late-evening lectures, the girl was assaulted with a knife and was raped near the building of the New Bulgarian University (NBU) in Sofia.

The criminal also took BGN 400 from the victim.

Preliminary reports after the crime said that the offender was of Arab descent and had been accommodated at the nearby Integration Center for Refugees.

During Wednesday's press conference, Tsvetanov announced that the Syrian national had been arrested on May 01, 2011 by Border Police in the southern Bulgarian town of Elhovo and had been placed under the authority of the State Agency for Refugees on September 07.

The Interior Minister said that the authority had not yet come up with a decision on the case, but the application for refugee status would have been rejected.

Shortly after the rape, local police received two signals for assaults by a 30-year-old woman and a 17 year-old girl.

The man had attacked the victims with a knife but had managed to go no further than steal a cell phone and a hand bag.

All of the three victims told police officers that the attacker had had some sort of a speech impediment or an accent.

During the search of the premises of the 53-year-old suspect, the police found the clothes he had been wearing during the three assaults.

DNA testing of biological material confirmed him as the rapist of the student.

The Syrian citizen has been detained for 72 hours and has been charged.

If found guilty, he will serve his sentence in a Bulgarian prison.