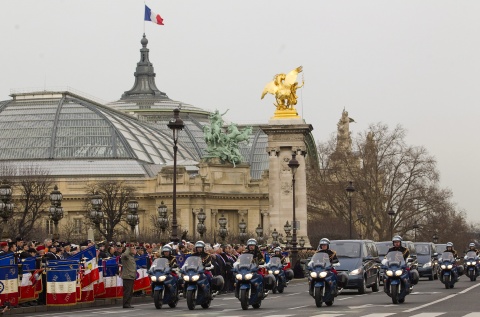 Hearses carrying the coffins of four French soldiers killed in Afghanistan by a man in Afghan military uniform, cross the Alexandre III bridge on the way to Invalides for an official funeral ceremony, in Paris, France, 24 January 2012. Photo by BGNES

Paris paid tribute Tuesday to the four soldiers from the French military contingent who were killed in Afghanistan last week, including Bulgarian sergeant Svilen Simeonov.

The military honors ceremony was held at the Home of the Disabled Soldiers in Paris (Hotel des Invalides) at noon with only the relatives of the dead and officials attending.

Before that the motorcade passed through the bridge "Alexander III" (Pont Alexandre III), where the citizens of Paris were invited to express their homage with „dignified silence and fraternal presence."

Uniformed military, parents of soldiers, and ordinary citizens came to the bridge to show their solidarity. About a thousand people paid tribute to the four murdered French soldiers.

Associations of veterans called on Parisians since last year to gather every time a French soldier falls in Afghanistan, but during the Tuesday ceremony, the army officers and the soldiers constituted three-quarters of the audience.

Soldiers in uniform were grouped by units. Firefighters of Paris were lined at the entrance of the bridge, before detachments of commandos and airmen.

Everyone froze just before noon to the passage of vehicles carrying the coffins of Chief Warrant Officers Sylvain Denis and Wilm Estin, of Sergeant Geoffrey Baumel and of Bulgarian Chief Sergeant Svilen Simeonov.

At the opening session on current issues of the government Tuesday, the French Parliament observed a minute of silence.

On Wednesday, President, Nicolas Sarkozy, will preside in Varces (Is?re) a national tribute to the four.

The bodies of the French soldiers, including one Bulgarian-born man, who were killed in northern Afghanistan last Friday, after a serviceman from the Afghan National Army opened fire, were transported to Paris on Monday.

Saturday, the Bulgarian National Radio announced that Bulgarian chief sergeant Svilen Simeonov, 34, was among those killed.

French Defense Minister Gerard Longuet, who left for Afghanistan immediately after the incident, traveled on the same craft that transported the bodies. They were sent from Kabul with military honors and will be buried with such in Paris.

Most of the 15 injured were also transported to France.

Longuet informed earlier that the killer, 21, had been recruited by the Taliban.

In the aftermath, President Nickolas Sarkozy said France was suspending its training programs in Afghanistan and that the question of an early French withdrawal would arise if security conditions were not re-established. The relatives of the victims have demanded from Sarkozy to immediately implement the latter move.

The subject will be on the agenda of the upcoming visit to Paris of Afghan President Hamid Karzai on Friday.

On Sunday, the embassy of France in Sofia issued a statement of regret for the Bulgarian member of the Foreign Legion.

Simeonov was born in the Bulgarian village of Rakovski, near the northeastern city of Razgrad. The family attended the ceremony in Paris, but say their son will be buried in his native Rakovski.