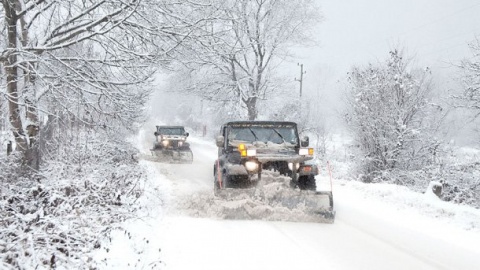 11 Bulgarian regions are under code yellow Saturday over the forecast of heavy snow and ice. Photo by BGNES

The area around the Alexander Nevsky cathedral in downtown Sofia is closed for traffic and parking Saturday, according to the City Hall.

The measure was triggered by the need to remove heavy snow masses. Accumulations and closures are also reported near the National "Ivan Vazov" Theater and the Presidential office.

Over 200 snowplows are cleaning the capital's streets since 3 am Saturday when the first snowflakes arrived.

The Inspectorate at the City Hall appeals to Sofia residents to clean sidewalks in front of their homes and warns it will begin checks Saturday afternoon.

The airport authority at Sofia International reports that all departing flights are delayed with about an hour to an hour and a half. Runways are being cleaned round-the-clock.

Arrivals from Moscow, Sankt Petersburg, Athens, and Istanbul are also late over inclement weather at these locations.

About 15 000 customers of the Power Utility CEZ, serving western and southwestern Bulgaria, are without electricity, the company announces. They are mainly in the Sofia Region, the Regions of Vidin and Lovech, and in the southern towns of Sandanski and Gotse Delchev.

In Sofia, 14 substations are without electrical power, which does not affect significantly the energy system, according to information of the Interior Ministry. The overall situation in the country now is normal and there is no major damage to the electrical network.

The wet snow causes trees and branches to fall on power lines. CEZ assure that emergency teams have been sent to all locations where damage is reported.