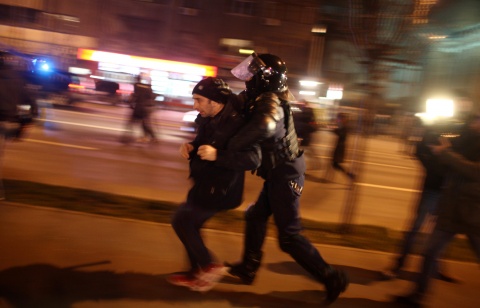 A Romanian protester (L) is chased by a riot-policeman (R) as demonstrators were evacuated from University Plaza during a protest against Romania`s government in Bucharest, Romania, 19 January 2012. EPA/BGNES

Hundreds of people have gathered in Romania's capital for the eighth day late on Friday, raising fears of more violence that has tarred anti-government protests leaving more than 60 people injured.

According to international media, about 500 demonstrators demanded the resignation of President Traian Basescu's government and early elections Friday night.

They say they've had enough of austerity measures which have left ordinary people impoverished, while officials waste public money and appear to get wealthier.

About 100 teachers also joined Friday's protests, saying education is underfunded and they can't afford to live on their salaries which have been slashed by one-fourth.

In Romania, news media reported that the unrest had spread over the past week to about 60 cities nationwide. About 7 000 people turned up at a rally in Bucharest on Thursday organized by the opposition National Liberal Party, according to the Ministry of the Interior, and the crowd in the downtown square later was said to number about 1 500.

A majority of the protests across the country have been peaceful, but at times clashes between riot police and some groups of demonstrators have turned violent.

On Thursday, as a large crowd of people marched through Bucharest and blocked traffic, police used tear gas after protesters started a fire and set up a barricade. Five people were injured.

Romanian media have broadcast footage of people who claim they have been beaten or fined by the police for no reason.

Prosecutors on Friday said they are also investigating four police officers for their conduct during the clashes.