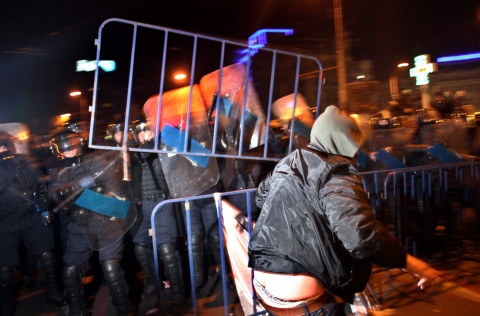 A Romanian protester throws a metallic fence over the barrage formed by riot-policemen as demonstrators were evacuated from University Plaza during a protest against Romania`s government in Bucharest, Romania, 19 January 2012. EPA/BGNES

Thousands of protesters demanded the resignation of the government of PM Emil Boc at a demonstration in Romania's capital, with some clashes between protesters and riot police late Thursday night.

The new rally came after a week of demonstrations against austerity measures. Protesters in University Square downtown shouted chants calling for the resignation of President Traian Basescu and his ally, Prime Minister Emil Boc.

Around 11 pm several demonstrators began dragging metal barricades into the street, and some hurled bottles and other objects at the police. Fifty-five people were arrested, and five were treated for injuries, according to Realitatea TV, cited by international media.

The wave of protests, which have spread across the country, broke out after a popular health official resigned last week over government proposals to overhaul the health-care system.

Protesters focused much of their anger on Romanian President Basescu, a former ship captain whose leadership style has been widely criticized as increasingly authoritarian, global media indicate.

They cited cuts to government salaries, frozen pensions and an increase in the value-added tax, as well as what they said was deep-seated corruption and a broader sense that the government served only its own interests and those of its richest constituents.

In Romania, news media reported that the unrest had spread over the past week to about 60 cities nationwide. About 7 000 people turned up at a rally in Bucharest on Thursday organized by the opposition National Liberal Party, according to the Ministry of the Interior, and the crowd in the downtown square later was said to number about 1 500.