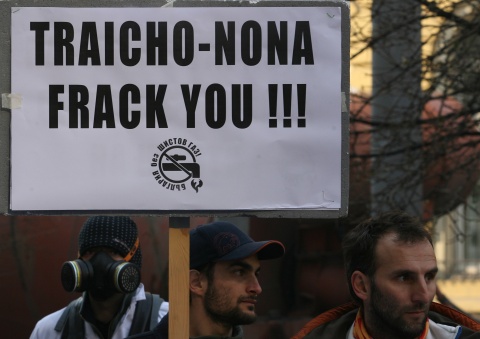 Over the past weeks, rallies were held across Bulgaria in protest against shale gas extraction and the use of fracking. Photo by Sofia Photo Agency

Bulgaria's parliament will vote on Wednesday the proposed ban on the use of hydrofracking technology in the extraction and exploration of gas and oil in Bulgaria.

The text is included in a draft proposal of the Parliamentary group of the ruling, center-right Citizens for European Development of Bulgaria party, GERB.

All exploration and extraction activities where the hydrofracking technology is planned must be immediately stopped, effective the date of the publishing of the decision Sanctions will include a fine of BN 100 000 and confiscation of equipment.

Those companies, which have already received licenses for exploration or concession for extraction of natural gas and oil, affected by the new ban, are given a three-month deadline to present altered projects for approval, otherwise they would lose their earlier-granted rights.

The ban does not include scientific research from independent scientific organizations, which are non-profit, are studying the risks from exploration and extraction of gas and oil, and are not using the hydrofracking method.

It was reported earlier Tuesday that the GERB cabinet is withdrawing its decision granting rights to sign a contract with the US company "Chevron" to search for natural gas and oil without specifying what technology will be used.

Bulgaria's Prime Minister, Boyko Borisov, stated during the meeting of the Council of Ministers that the government would not grant "Chevron" a permit to study shale gas deposits with the use of hydrofracking and would allow it only when there is a worldwide guaranteed technology for such extraction.

The debates on the issue will be launched again when the European Commission and Parliament begin such debates. Foreign Minister, Nikolay Mladenov, pointed out that a similar ban could be imposed for the entire EU.

Borisov stressed that shale gas is key national resource and its exploration is important for the country's economy along with the option to use it as a trump card in negotiating gas prices with Russia.