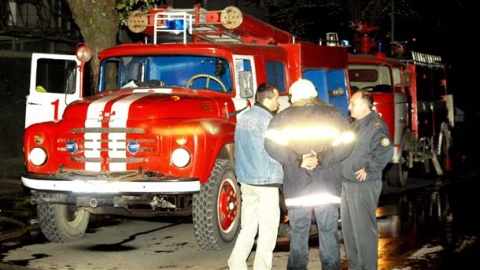 Three fire brigades extinguished an overnight blaze in Sofia, but the three charred bodies were found inside the house. Photo by BGNES

A young mother, 25, and her two small children, a 5-month-old and a 5-year-old, perished in an overnight fire in the Bulgarian capital Sofia.

The house, which burned, was old and half of it was in ruins, but the second floor was livable, while the basement housed several small shops. It was located on "Cyril and Methodius" street, in downtown Sofia, near the market known as "Zhenski Pazar" (Women's Market).

The call about the fire was placed around 5:45 am Monday morning. Three fire brigades arrived on the scene and extinguished the blaze, but the three bodies were found inside. Ten people were evacuated.

The fire erupted on the third floor of the building. Neighbors are quoted saying that the house was occupied and visited by people dealing with cigarette smuggling. Three or four families lived there.

The authorities are probing the case.