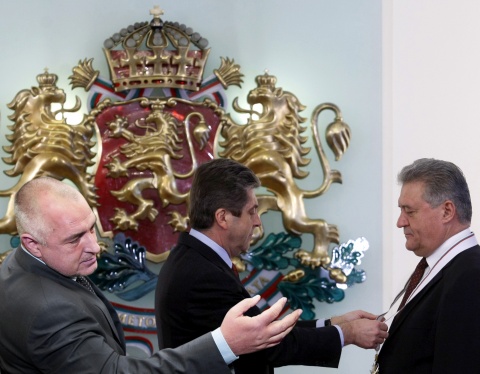 Bulgaria's Vice President Marin announced Friday night that he returned the medal he got from President Georgi Parvanov on January 10 for his "grand contributions to the Republic of Bulgaria" in his capacity as both Vice President in 2002-2012, and a general from the Bulgarian Army.

Marin's reaction came after earlier on Friday Bulgarian Prime Minister Boyko Borisov declared he was really baffled as to what achievements Marin had - other that serving as the VP - in order to deserve a state medal. Borisov made these comments on Friday as well as during the weekly Cabinet meeting on Wednesday, as indicated by the meeting transcript released Friday.

However, his statements on Marin's decoration with the top state medal come after the his own Cabinet approved a motion by Defense Minister Anyu Angelov to award the Vice President.

Thus, Friday night the Bulgarian Vice President sent to Prime Minister Borisov not just the medal itself but also the decree for Marin's decoration, which Borisov signed twice.

"I would accept it back when another Prime Minister, who is worthy of that, nominates me for this award," Marin said in a statement published on the Presidency website. He was especially infuriated by a quote by Borisov which appeared in the government's weekly meeting transcript:

"Stara Planina" must be kept as the top of the state orders. I don't know what exactly Angel Marin did to deserve it, I have no explanation. Following the same logic all former PMs, Deputy PMs, etc, must be awarded. One thing is to have an internationally recognized profession, it's a whole other story to have Angel Marin who was the Vice President," Borisov told his ministers.

"That is why I cannot accept it as a dignified thing to bear an order for which he himself nominated me, and re-signed the decree for my decoration," Marin said regarding what he described as a "verbal abuse" by Borisov.

"In my view, Borisov is a disgrace for Bulgaria. That is why I will not be present in Parliament or anywhere else that he might be - at the ceremony for the inauguration of the newly-elected President and Vice President," said the VP, whose term expires on January 22.

"That is the one thing I can do in my capacity of a general from the Bulgarian Army and Vice President of Bulgaria in order to preserve not only my personal honor and dignity but also the honor and dignity of thousands of people, of Bulgaria," Marin concluded in his Friday night's statement.

In addition to his "contributions" to the Bulgarian armed forces and state, he got the top state medal on the occasion of his 70th birthday - January 8, 2012.