Iran Welcomes US Rescue of Its Sailors 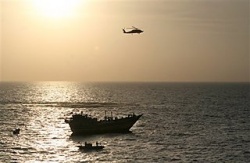 A U.S. Navy SH-60S Sea Hawk helicopter provides support to a visit, board, search and seizure (VBSS) team in a 7-meter rigid-hull inflatable boat, assigned to the guided-missile destroyer USS Kidd (DDG 100). Photo by US Navy

Iran has welcomed the US Navy's rescue of 13 Iranian fishermen held by Somali pirates, describing it as a "humanitarian gesture."

The sailors were on a fishing boat that had been hijacked by alleged pirates in the Arabian Sea, near the Strait of Hormuz. On Thursday, a team from destroyer USS Kidd boarded a suspected pirate vessel, taking 15 suspected pirates into custody, and freeing 13 Iranian hostages

Iran has also rescued foreign sailors from pirates on occasion, the Iranian Foreign Ministry has reminded, pointing out that such actions do not affect overall relations between countries.

"It is the responsibility of all nations to rescue nationals from other countries from pirates," a spokesman for Iran's Foreign Ministry, Ramin Mehmanparast, has stated, as cited by CNN.

USS Kid is one of the several warships escorting the carrier USS John C. Stennis - which Iranian military chiefs early this week warned to stay out of the Persian Gulf.