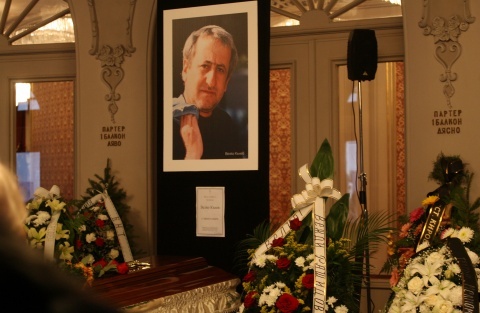 The wake for beloved Bulgarian actor, Velko Kanev, brought hundreds to the foyer of the National Theatre in Sofia. Photo by BGNES

At the beginning of January, Bulgarian folk singer Nadka Karadjova passed away at the age of 73. In her creative carrier, she had given over 14 000 concerts and 80 states abroad. She was a winner of many international prizes and prestigious honors in Bulgaria.

In April, Georgi Rusev, one of the most famous and beloved Bulgarian film and theater actors, died at the age of 82. His movie debut was in 1966, and in the 1970s and 1980s Rusev took part in some of the most emblematic Bulgarian movies.

On May 1, Bulgarian athlete and highlife figure Ivan Slavkov, aka Bateto, who had gained colorful notoriety over the past decades, passed away in Sofia Sunday aged 70. In his peculiar career, Slavkov was head of the Bulgarian National Television (1972-82), the Bulgarian Olympic Committee, the Bulgarian Football Union and a member of the International Olympic Comittee. Bateto gained international notoriety in 2004, when undercover BBC journalists apparently managed to "bribe" him to vote for London for the 2012 Olympics.

At the beginning of June, Prominent Bulgarian painter and poet, Georgi Trifonov, passed away at the age of 63. Trifonov was believed to be among the brightest and most talented contemporary Bulgarian artists. His work includes a variety of visual arts: paintings, decorations, drawings, graphics, and illustrations. He had further authored seven poetry books and one script.

Vasa Gancheva, a prominent Bulgarian TV critic, died on July 4 after a prolonged illness. She has worked as a film director, script writer, journalist and a TV columnist.

At the end of July, John-Dimitry Panitza, a prominent Bulgarian journalist, passed away at the age of 80. Panitza was considered to be the man with the most outstanding international career among Bulgarian journalists. He was involved in broad charity activities. John-Dimitry Panitza was the chairman and founder of the Free and Democratic Bulgaria Foundation, as well as Junior Achievement–Bulgaria. He was also among the founders of the American University in Bulgaria and a former honorary member of the Bulgarian Academy of Sciences,

Bulgaria's first female movie director and one of the country's prominent filmmakers, Binka Zhelyazkova, passed away on July 31 at the age of 88. Her movies have received numerous awards at festivals in Moscow, Cannes, Montreal, Brussels, Berlin, Cartagena, Karlovi Vari, and at local festivals.

In September, Chair of the Union of Bulgarian Journalists, Milen Valkov, passed away after a brief illness.

Also in September, Reserve officer Col. Tsvyatko Tsvetkov, a former Chief Secretary of the Bulgarian Interior Ministry and a well-known Socialist Party activist, died at the age of 67.

Popular and beloved Bulgarian actor, Velko Kanev, passed away on December 12 at the age of 63. He became a member of the troupe of the National Theater in 1979, where he performed a number of emblematic roles - but it was cinema that made Kanev a true celebrity and a beloved actor for generations of Bulgarians. One of his movies – "Orchestra without a Name," has been voted in spectators rankings as an all-time favorite among Bulgarian films.

Obituaries » Be a reporter: Write and send your article
Tags: The Bulgaria 2011 Review
Advertisement
Advertisement
Expats.bg All Are Welcome! Join Now!
Related Articles:
More from Obituaries