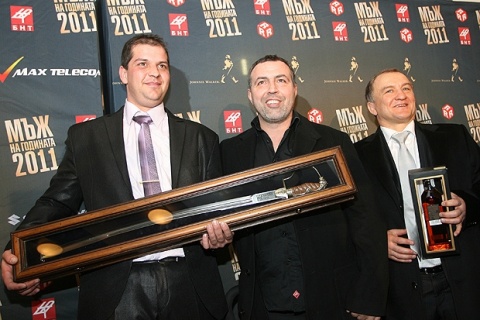 Stefan Ivanov, 29, a mechanic from the small town of Chirpan, who was the first to come to the rescue of the victims of a hellish bus crash in Bulgaria, which killed nine in June, has been named "Man of the Year 2011".

The winner was announced at a special ceremony, held Thursday evening, at the so-called Youth Drama Theater in downtown Sofia.

Standing ovations greeted the the savior, who has been hailed as a national hero in Bulgaria, and many people rose to their feet to show respect.

"This sword is heavy. So is the recognition that I receive today and will have to defend in the coming years. I want to thank everyone who supported me," an emotional Ivanov said as he was handed a luxurious sword as a trophy.

Stefan Ivanov made it to the top in the traditional contest after defeating Simeon Shterev, coach of Bulgaria's top female wrestler Stanka Zlateva, and actor Hristo Mutafchiev.

The Chair of the Bulgarian Actors Union, Hristo Mutafchiev, who suffered a stroke at the end of October last year, entered the contest for the first time. He prompted the people's admiration by finding the strength to return to the stage even though not fully recovered. He even wrote a book to help people who are going through the same ordeal.

Bulgarian Simeon Shterev was declared in October Best Female Wrestler coach of the year 2011 by the International Federation of Associated Wrestling Styles (FILA).

The top runners were nominated by journalists from Sofia and around the country.

The "Man of the Year" contest marked this year its 21th anniversary while Darik radio organized it for the fourth time in a row.