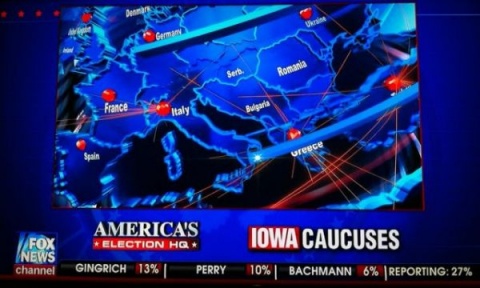 The "map" shown by Fox News, as displayed by the Macedonian Kurir daily.

A peculiar mistake occurred during a Fox News broadcasting program, as a map was shown that misplaced several Eastern European countries and "moved" Bulgaria to what once was Yugoslavia.

The countries of Macedonia, Croatia, Bosnia, Slovenia, Montenegro and Kosovo were completely omitted on the map, as former Yugoslavia appeared as a unity apparently taken over by Bulgaria.

Serbia was "spared" - and was mistakenly shown to occupy a huge territory, encompassing Hungary, Austria, Slovakia and the Czech Republic.

Mysteriously, no country name appeared on Bulgaria's actual place on the map.