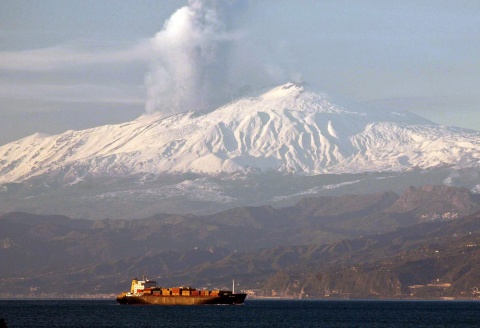 A cloud of hot ash erupts from the summit of Etna volcano, near Catania, Italy 05 January 2012. Photo by BGNES

Italy's Mount Etna spewed a column of hot ash into the sky on Thursday, signaling that Europe's highest active volcano has roared into life.

The column of ash rose up to 5000 meters above sea level and lava was also seen flowing from a new crater on the southeast side of the summit toward the uninhabited Valle del Bove region, according to the Catania Institute of Geophysics and Vulcanology, as cited by The Australian.

The Catania Fonatanrossa Airport remains open at this stage, but a crisis unit continues to monitor the activities of Etna so as to be able to adjust the flights' operational situation to the volcanic activity.

The 3295m peak regularly awakens to spew lava and ash, which entails full or partial airspace closures at Catania airport, the Australian reminds.