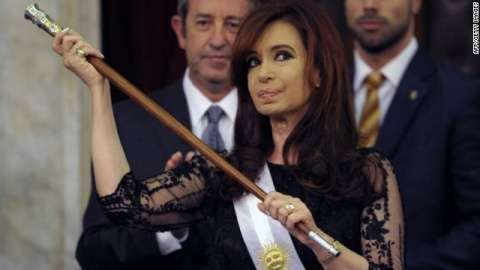 Argentine President Cristina Fernandez de Kirchner, who was diagnosed with cancer in her thyroid gland at the end of last year, is undergoing surgery Jan 4.

Fernandez will step aside as president for 20 days until 24 January, with Vice-President Amado Boudou taking over.

The cancer has not spread to other parts of her body, a spokesman said, as cited by CNN.

Fernandez, 58, recently began her second term as president after a landslide election victory.

She is still mourning the loss of her husband - former President Nestor Kirchner – who died last year after suffering a heart attack.

Papillary carcinoma is the most common type of thyroid cancer and has an excellent survival rate, according to the U.S. National Library of Medicine.

More than 95% of adults with papillary thyroid carcinoma survive at least 10 years, according to a description on the library's website. Treatment includes surgery, radioactive iodine and medication, the library says.

Possible complications in surgery can include damage to a nerve that controls the vocal cords or accidental removal of a gland that helps regulate blood calcium levels, according to the medicine library.

Paraguayan President Fernando Lugo was diagnosed with non-Hodgkin's lymphoma in 2010.

Venezuelan President Hugo Chavez announced that doctors had diagnosed him with cancer in June. He did not specify what kind of cancer he had, but after undergoing several rounds of chemotherapy, he said in October that he had been cured.