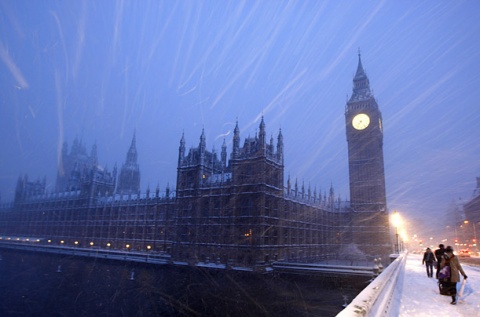 A strong storm hit Great Britain in the first days of 2012, stirring havoc in London and across the country. Photo by Time

Two Brits have died in Great Britain as casualties from the severe winter storm that hit the country at the very first days of 2012.

BBC reports that a man in his 50s was killed in Kent when a tree collapsed on his van, and a crewman died after being injured on board a tanker in the English Channel.

A bus driver in Surrey suffered serious injuries when a tree fell on his bus.

Thousands of people are still without power in parts of England, Scotland and Northern Ireland.

The gusts reached 160 km per hour on Tuesday, causing trees to fall on railway tracks and power line; trucks overturned and blew over on busy roads, creating huge traffic jams, and flood warnings were issued after rivers swelled.

High seas and force 10 winds caused the Port of Dover to close, but it has now reopened.

Railways schedules all over the country have been disrupted while the airports in Glasgow and Edinburg in Scotland canceled over 75 flights. There are also cancelations and delays at the London airports Heathrow and Gatwick.

Scores of rescue teams are cleaning the roads and affected areas from fallen trees and branches.