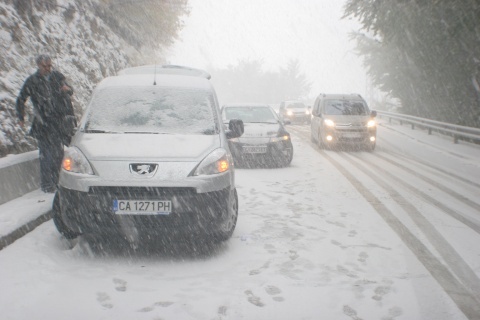 Untypically heavy snowfall has been reported in parts of Southern Bulgaria. Photo by BGNES

Vehicles have been stranded in Southern Bulgaria near Plovdiv as a result of surprisingly heavy snowfall in the afternoon on Saturday, the last day of 2011.

The inclement weather is reported to have created greatest problems near the town of Asenovgrad where snow drifts have reached 60 cm in height.

Traffic is difficult all over the Rhodope Mountains in Southern Bulgaria, with the snow cover in the ski resort of Pamporov reaching 90 cm.

Twenty-one out of Bulgaria's 27 districts have declared a Code "Yellow" alert over the inclement winter weather, the third highest level of alert meaning potentially hazardous weather.

Only Northwestern Bulgaria is expected, untypically, is expected to have milder weather in the first days of 2012.