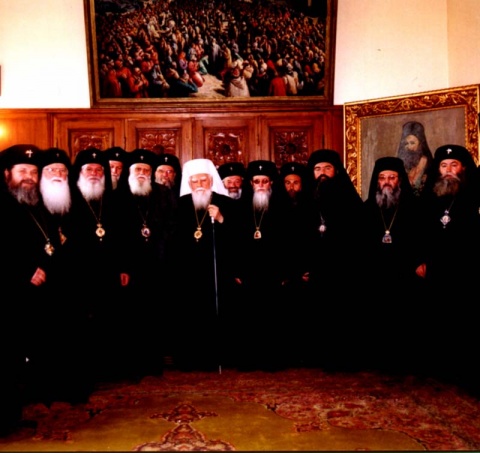 The Holy Synod of the Bulgarian Orthodox Church. Photo from dveri.bg

The Holy Synod of the Bulgarian Orthodox Church has declared “reservations” against in vitro fertilization and surrogacy, viewing them as a “human interference that is counter to God’s will in the existential foundations of life.”

This has been made clear in a statement of the Bulgarian Patriarchate on the website of the Bulgarian Orthodox Church (in Bulgarian HERE) discussing assisted reproduction and surrogacy, as the two are becoming more popular in Bulgaria, with surrogacy just being introduced.

The position of the Bulgarian Orthodox Church comes as a reaction to amendments of the Bulgarian Family Code adopted at the end of October 2011 that made surrogacy legal but banned surrogate mothers from receiving any money for their “service”.

According to the Bulgarian Patriarchate, the methods of "In vitro fertilization"-IVF; "Intracytoplasmic sperm injection"-ICSI and surrogacy “are contemporary phenomena and bioethical problems that have the same focal point – the question about the origin, dignity, sense, and purpose of human life in all of its phases.”

“This is not just a philosophical and scientific question. This is a supreme theological and existential question because it goes beyond philosophical and empirical knowledge, and the temporary character of our earthly existence and enters the sphere of subconscious spiritual knowledge and the intransient dimensions of human being,” states the Bulgarian Holy Synod.

The Bulgarian Orthodox Church believes that science and medicine in particular do not have unconditional and unlimited rights.

“Since the methods of assisted reproduction and surrogacy violate the blessed environment and God-established forms of human conception, birth, and breeding, the Holy Church expresses its concert over the many risks and challenges that these medical practices pose before contemporary people even though they may often be based on sincere hopes and positive motives in the name of life,” the church says.

The Bulgarian Orthodox Church cites the Gospel as to demonstrate that the above-mentioned reproduction methods may pose undue interference in God’s affairs but goes beyond that to express its worries hinting at a global “business” with human embryos.

“The much desired parenthood is turning into a goal in itself that replaces the primary cause of the closeness between a man and a woman – their love and desire to support and make happy one another as personalities with a common course of life. At present over 4 000 000 “redundant” human embryos are awaiting their adoption and birth. Thus, cryo preservation is encouraging the trading with human beings, and such globalized commercialization and mobility in the treatment of human “material” could cause a true genetic chaos on a world scale,” the church comments.

According to the Patriarchate in Sofia, the Bulgarian Orthodox Church is all up for encouraging the Bulgarian state to help couples with reproductive problems – but by focusing their efforts on adoption and foster care – a practice “corresponding to the interests of the Bulgarian society and the high Christian values.”