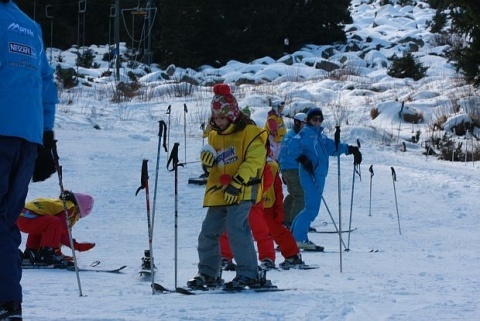 Children are seen skiing in Vitosha Mountain nearby Bulgarian capital Sofia, after the local company declared it will not open facilities for the season. Photo by Sofia Photo Agency

Bulgaria's Prime Minister, Boyko Borisov, believes that warnings from environmentalists NGOs that the amendments to the Forestry Act would facilitate the construction of ski tracks in natural parks are "speculations with people's fears."

His statement was made during the last meeting of the cabinet for 2011 and can be found in the shorthand notes, along with the approved new texts of the Act, the Bulgarian "Trud" (Labor) daily writes.

According to Borisov, some of the NGOs are financed by large resorts in Europe, which are competitors of Bulgaria as a winter tourist destination.

"See, we hold world ski cup finals for three years now – two in the resort of Bansko, and one in Pamporovo – our resorts are doing great; this is huge advertisement and publicity, and competitors don't like it," the PM told his ministers.

He voiced several appeals to the members of the cabinet to call "things as they are," when commenting on the "ranting" environmentalists.

"The truth is our best protection, because they are so laud; when they say the forests will be destroyed everyone will hear them," Borisov stated, stressing that the thousands of kilometers of ski tracks in the Alps have not harmed the mountain's nature. He further gave as example Bansko, where the problem was not the development of the ski zone, but large-scale construction in the town.

The Minister of Sports, Svilen Neykov, and the Deputy Minister of Economy, Energy and Toursim, Ivo Marinov, are quoted saying they supported the amendments because they would contribute to the development of sports and winter tourism. Environment Minister, Nona Karadzhova, pointed out the amendments do not eliminate the procedures for approval of projects and or the alignment of these projects with the management plans of natural parks.

Bulgaria's Greens Party informed they have notified the European Commission about the new texts in the law, which will make construction of ski tracks and lifts easier.

The amendments give investors opportunities to build ski facilities without the need to change the official status of the use of the land.

The cabinet's move came after the Vitosha Ski company, which manages facilities on the mountain, announced e arlier in December that it will not open them this season, as the government obstructed its activities.