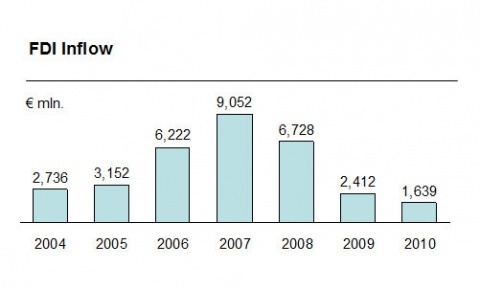 Bulgaria has attracted a total of EUR 37 B in foreign direct investment in 2001-2011, show estimates of the "Investors of the Decade" Survey of Novinite.com (Sofia News Agency) and Novinite.bg.

This makes 2001-2011 the most successful decade in Bulgaria's history ever in terms of attracting FDI.

Final data of the Bulgarian National Bank and the InvestBulgaria Agency shows that in 2001-2010, Bulgaria's total FDI reached EUR 35.7 B.

For more exciting information and insights into Bulgaria's investment trends and policies, look forward in end-January 2012 to the new project of Bulgaria's largest English-language media Novinite.com (Sofia News Agency) and Novinite.bg: "Investors of the Decade" 2001-2011!

"Investors of the Decade" will be a special survey to be published by Novinite.com (Sofia News Agency), Novinite.bg, The Sofia Morning News, and Bulgarian Business Adviser at the end of January 2012.

"Investors of the Decade" will focus on a "Who is Who" of the top investors in Bulgaria during the most successful decade in Bulgarian history in terms of attracting investment.

The "Investors of the Decade" survey will present to you the CEOs of key investors in Bulgaria. We will bring to your attention expert opinions of top economists and financiers about Bulgaria's investment trends, advantages, and potential. We will talk to top government officials about the future of Bulgaria's investment policies.