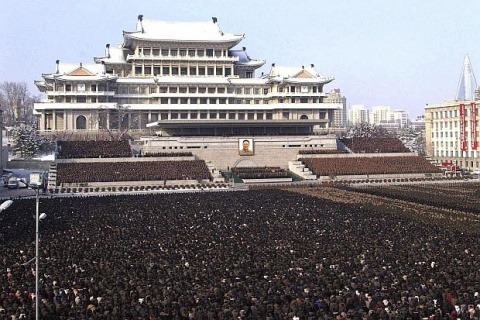 The solemn meeting ended with a three-minute silence, which officially brought closure to the two-day burial ceremonies in North Korea.

Kim Jong-il's designated successor and third son, Kim Jong-un, was on the tribune lining the square, dressed in black, along with top government and army officials.

The State media already officially announced Jong-il's son as the new leader of the country, the army and the Communist party.

This was confirmed by the Chair of the Presidium of the Supreme General Assembly, Kim Yong-nam, who told the massive crowd that "respected Comrade Kim Jong-un is our party, military and country's supreme leader who inherits great comrade Kim Jong-il's ideology, leadership, character, virtues, grit and courage."

"The fact that he completely resolved the succession matter is Great Comrade Kim Jong-il's most noble achievement," he said.

Many political experts say the memorial event is both Kim dynasty's unofficial handover of power and a vow for loyalty before the new leader.

Kim Jong-il died of a heart attack on December 17, at the age of 69, and has been lying in state since then.

He was in the process of formalizing Kim Jong-un as his successor when he died but the transition was not complete. Experts say Kim's death could bring instability in North Korea, which the West and regional neighbors fear over the country's nuclear program.

Kim Jong-un is thought to be in his late 20s and has little political experience.