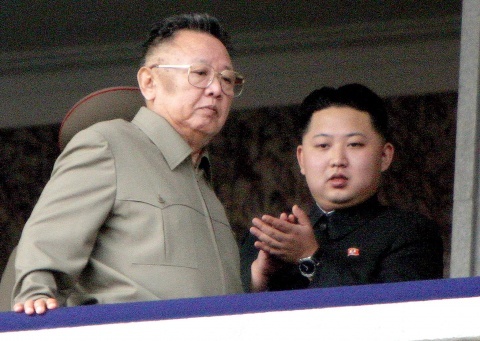 Late North Korean dictator Kim Jong-Il (h) and his son and designated heir Kim Jong-Un (R) watch from a podium as soldiers march in a parade celebrating the 65th anniversary of the ruling Korean Workers Party in Pyongyang. Photo by BGNES

Kim Jong-il died of a heart attack on December 17, at the age of 69, and has been lying in state since then.

No schedule was released ahead of the commemorations and no foreign delegations are attending, BBC reports.

TV footage became available much later then the start of the ceremonies. It shows tens of thousands of soldiers with their heads bowed as a giant portrait of the dictator is carried slowly on a limousine through the streets and squares covered with snow and lined with weeping people.

Designated successor and third son, Kim Jong-un, walked in tears beside the hearse, dressed in black, and without gloves and hat, despite the cold weather.

The ceremonies are seen as a repeat of the displays of pomp and military power that marked the death of Kim Jong-il's father, Kim Il-sung, in 1994.

Among other things, the rites surrounding the funeral are expected to reaffirm Jong-un's image as the country's new leader – he is thought to be in his late 20s and has little political experience. At the procession, Kim Jong-un was accompanied by his uncle, Chang Song-taek, who is seen as a key player in the consolidation of power.

According to BBC, foreign diplomats were told to gather at a stadium to be taken to the Kumsusan Memorial Palace - where Kim Jong-il has been lying in state - to see the hearse pass by.

Kim Jong-il was in the process of formalizing Kim Jong-un as his successor when he died but the transition was not complete. Experts say Kim's death could bring instability in North Korea, which the West and regional neighbors fear over the country's nuclear program.

Commemorations are also planned for Thursday, with a three-minute silence at noon local time, followed by trains and ships sounding horns. After that, the national memorial service will begin.