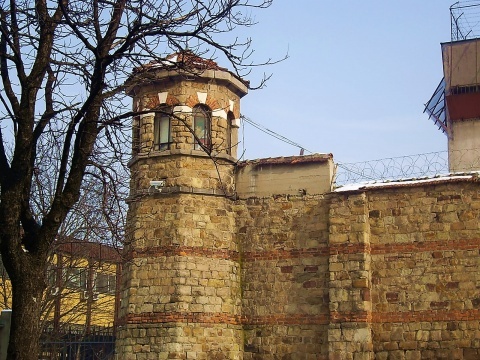 The building of the old Central Prison in Sofia is crumbling. Photo by niesnimame.blogspot.com

The overcrowding of prisons in the largest Bulgarian cities remains a huge problem, triggering a number of human rights violations.

The conclusion was made by the Bulgarian Helsinki Committee, BHC, citing their own study at the prisons in Sofia, Plovdiv, Varna, Burgas and Pleven and the so-called dorm (a minimum security facility) in Kremikovtzi, near the capital.

During the last visit of BHC at the Burgas jail, 866 inmates were housed there, while the facility has a capacity of 371 – or 40 beds in a cell with an area of 55 square meters; beds were often piled one on top of the other, some inmates were sleeping on the floor on mats; there were no WCs inside and buckets were used instead.

The Committee stresses that despite their numerous alarms and calls for improvement as this latest one, and all cabinets in the last 20 years agreeing that the country's prisons are in a terrible shape, nothing had been done - the system had been somewhat modernized, but just on the legislative side and there were scarce partial repairs at some facilities.

BHC insist on target financing, not only for maintenance, but also for the construction of new facilities, and renovations and repairs.

On November 25, 20110, the UN Committee against Torture (CAT) published its recommendations for a number of countries, including Bulgaria, where the latter is strongly criticized over the still existing torture and humiliation, bad conditions in holding cells and prisons, the overuse of isolation as punishment in jails, and for those with life sentences, etc.

On November 14, 2011, Bulgaria's Justice Ministry announced it had prepared a Bill for Amendments to the Punishments and Arrests Act that relieve the State from obligations to finance important activities at penitentiaries, and postpone for another five years the introduction of mandatory 4 square meters of living space per inmate.

BHC point out these amendments are violations of prisoners' rights.