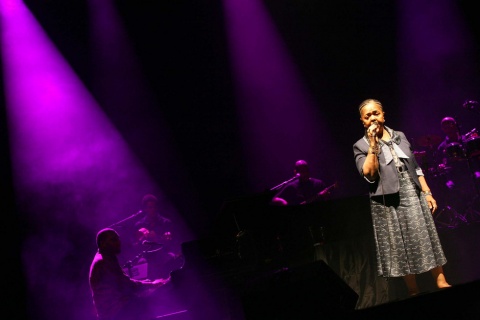 Cesaria Evora enthralled her Bulgarian fans with her profound soulful songs at two concerts – in 2005 and 2009. She is pictured here during her concerts at the National Palace of Culture in Sofia. Photos by SPA and Dnevnik daily

Singer Cesaria Evora, dubbed the "Barefoot Diva" for often performing without shoes, has died in her native Cape Verde at the age of 70.

The musican, who began her career singing in the bars of Mindelo in the West African island nation, enthralled Bulgarian fans with her profound soulful songs at two concerts – in 2005 and 2009. Evora was forced to retire earlier this year due to ill-health. She suffered a stroke while on tour in Australia in 2008 and later underwent open heart surgery.

"I have no strength, no energy. I want you to say to my fans: forgive me, but now I need to rest," BBC cited her saying in September.

"I infinitely regret having to stop because of illness, I would have wanted to give more pleasure to those who have followed me for so long."

Cesaria Evora was born in 1941 in the port town of Mindelo on the Cape Verde island of Sao Vicente.

She is known as the barefoot diva because of her propensity to appear on stage in her bare feet in support of the disadvantaged women and children of her country.

Long known as the queen of the "morna", a soulful genre sung in Creole-Portuguese, she mixes her sentimental folk tunes filled with longing and sadness with the acoustic sounds of guitar, cavaquinho, violin, accordian, and clarinet.

Evora did not begin her recording career until 1988, and won a Grammy Award in 2004 for her album Voz D'Amor.

She was famed for singing songs of longing with her rich contralto vocals.

Her fourth album, Miss Perfumado, was her breakthrough hit in 1992. It sold more than 300,000 copies worldwide, and resulted in a number of tours. She released 10 albums in all.

Evora had a penchant for alcohol and cigarettes, and in later life her health began to decline.