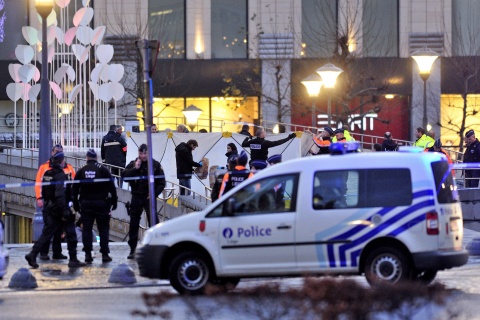 An ambulance leaves Place Saint-Lambert after a gunman opened fire on a square packed with children and Christmas shoppers in the eastern city of Liege, Belgium, 13 December 2011. Photo by BGNES

A Bulgarian exchange student at the University of Liege became a witness of the deadly grenade and assault rifle attack occurred in a busy shopping district on Tuesday, killing five and injuring more than 120. Marian Todorov, who is studying international management in Liege through an exchange program, told CBC News he was in the gym about 100 meters away from the square when he heard gunshots.

At first, police suspected there was more than one attacker, Todorov said. Officers blocked the area around the buildings and told people to stay inside.

"During the attack I didn't really understand what was going on, due to lack of information. The sight of all the people running and shouting definitely scared me," Todorov said. "The shock came afterwards when I saw the number of ambulances that were coming and going from the scene of the accident."

Police in Belgium are trying to determine what motivated a local man to open fire on a busy marketplace in Liege.

Amrani died at the scene, but officials said he had not been shot by police. Some witnesses said he had shot himself in the head.

Police have said he was known to them for previous drugs and firearms offenses and acted alone in the attack.

Amrani, a resident of Liege, had been jailed for 58 months in September 2008 for possessing firearms and drugs, media reports said.

The city is to hold a minute's silence and a vigil at midday on Wednesday.