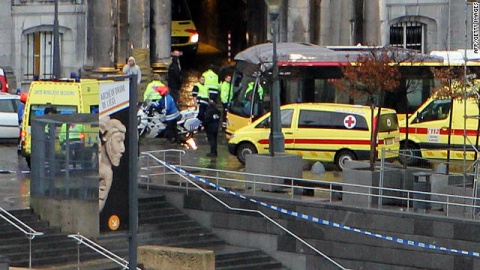 A grenade and gun attack in this eastern Belgian city of Liege left five people dead, including the attacker. Photo by CNN

Police in Belgium have discovered a woman's body at the home of a gunman who went on the rampage in the city of Liege, killing four people and himself and wounding more than 120.

Belgian media reports say the body found at the killer's property was that of a 45 year-old cleaner, who worked for one of Nordine Amrani's neighbours.

"It was found in a shed which he used, notably to grow cannabis," Liege's prosecutor general, Cedric Visart de Bocarme, told Belgian public radio, RTBF, as cited by BBC.

Police in Belgium are trying to determine what motivated a local man to open fire on a busy marketplace in Liege.

Amrani died at the scene, but officials said he had not been shot by police. Some witnesses said he had shot himself in the head.

Police have said he was known to them for previous drugs and firearms offences and acted alone in the attack.

Amrani, a resident of Liege, had been jailed for 58 months in September 2008 for possessing firearms and drugs, media reports said.

The city is to hold a minute's silence and a vigil at midday on Wednesday.

An 17-month-old girl became the fourth victim late on Tuesday, dying in hospital despite undergoing hours of emergency treatment.